Start a Wiki
watch 01:48
Who is Hendrickson?
Do you like this video? 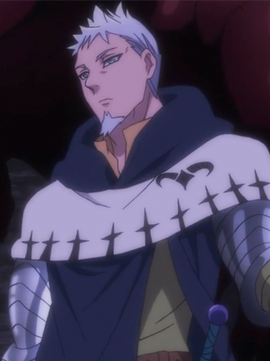 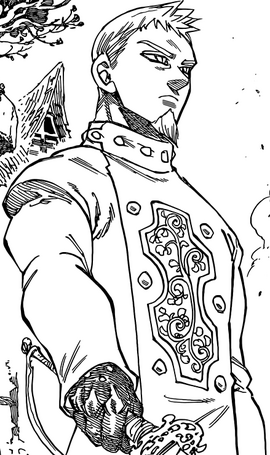 Hendrickson「ヘンドリクセン」 is a former Great Holy Knight of the Liones Kingdom alongside his lifelong friend, Dreyfus.[1] He is responsible for the creation of the Reactor-class Holy Knights that threatened the peace of the kingdom. He is also the main antagonist of the Holy Knights Saga.

Hendrickson wears a set of full-body armor which is covered by a robe. He has short white light-colored hair and a goatee. During his younger years as a Holy Knight, he had a more well-combed hairstyle and did not possess a goatee.

After activating his demon powers, Hendrickson took a form that was identical to his younger self, albeit shirtless, with the same black markings as demon Meliodas, and a black eye.

After drinking the Gray Demon's blood, he returns to his old form with several demonic features. He now has gray skin on his upper body, and black skin on his lower body. Horns have sprouted out of his head, and a pair of wings out of his back. His eyes are now yellow and red, with black veins above and below them.

Hendrickson is a serious man, who, like Dreyfus, appears to be willing to capture the king and enslave the citizens to prepare for the Holy War. However, Hendrickson is less honorable than Dreyfus and is willing to lie and manipulate enemies and allies alike. He believes that without a war his order has no true purpose, so he's willing to revive the Demon clan in order to provoke the Holy War and give the Holy Knights an enemy to fight.

Hendrickson appears to be a level-headed person, as he stays cool when he senses Diane's powers and calmly told Helbram to retreat. Hendrickson believes that people were a lot stronger and had more spirit during war time, Hendrickson has no qualms about killing people who get in the way of his plans, even if said person is a king or his lifelong friend. In his younger years, Hendrickson was loyal to his King and humble to the people of Liones before the coup ten years later. He tends to have a playful side as he scolded his friend Dreyfus for taking a nap in broad daylight. Dreyfus states that after he persuaded Hendrickson to help him murder Zaratras, his personality completely changed. In the past he was very kind and gentle, and somewhat shy (especially in contacts with women).

After his defeat at the hands of the Seven Deadly Sins and the release of the Ten Commandments, Hendrickson has returned to his previous self during his youth, now with the darkness of the demons vanquished from him. He deeply regretted all of his actions and now wishes to atone by defeating the Ten Commandments and saving Dreyfus as well as the Kingdom of Liones. He even strives to protect innocents and the three misfits, whom he was glad he didn't kill during his corruption under darkness.

As a child, Hendrickson used to live among the Druids on Istar. He was ordered to look after dead bodies until they become skeletons in order for the dead to stay dead. He hated his job due to his fear of dead bodies. Hendrickson always wanted to leave the job which, ironically, his wish was granted in the form of his Acid power. Hendrickson became known as a coward and a cursed child which he ran out of the village. At some point of time, Hendrickson joined the Holy Knights of Liones and first met Meliodas whom he sensed a massive malevolent power within the Dragon's Sin of Wrath, earning his interest, fear and admiration.

Twenty-one years ago, Hendrickson found his friend Dreyfus sleeping outside in broad daylight and childishly chided him. As they walk around the capital, they discussed of their king's Vision about the prophesied Holy War and debates the Holy Knights' reason to exist in a world of peace. At the bar, Hendrickson noted Meliodas' modesty when the Seven Deadly Sins' captain claimed that Zaratras is invincible after their training with the Great Holy Knight.

One day, he and Dreyfus investigated the remains of the kingdom of Danafor. Inside the hole, Hendrickson told his friend about his past at the village of Druids much to Dreyfus amusement. Dreyfus told him that he wanted to be a person that protects people and a figure for his son. Hendrickson got happy, but he then sensed the demon Fraudrin who asked Dreyfus for his body, so they can revolt against Zaratras. Dreyfus refused the offer so Fraudrin attempted to steal his body. Due to Dreyfus' unshakable will, the attempt failed. Then Fraudrin steals Hendrickson's body and blackmailed Dreyfus into giving him his body. Dreyfus allowed Fraudrin to steal his body in exchange for the demon leaving Hendrickson's body. Fraudrin stole Dreyfus' body as soon as the offer was given. Fraudrin conspired with Hendrickson to murder Zaratras when they got back to Britannia. Hendrickson poisoned Zaratras and Fraudrin gave the finishing blow. The murder was pinned on the Seven Deadly Sins, and they were chased out. Hendrickson's personality became darker after those events.

Sometime later, Hendrickson and his men traveled towards the Fairy King's Forest and discovered the corpse of the Red Demon. They soon realized the powers of the Demon's blood, using it to strengthen Holy Knights and granting them new abilities. Hendrickson later encounters Helbram's dead body at a black market which he bought and used Enslavement of the Dead, his people's forbidden technique to revive him and used him as a slave to serve him as a Holy Knight of Liones and his right hand man. A few years ago, he found the Gray Demon's corpse and studied it. Hendrickson started experimenting on Holy Knights, creating Reactors known as the Old Generation which are recognized as failures due to their instability.

Hendrickson's power is several times stronger than an average Holy Knight, as shown when Helbram was able to easily defeat a raging Meliodas after Hendrickson provided him a mere fraction of his power using the ability Link, despite being cornered previously when he already had taken on the power of twenty Holy Knights. Hendrickson has proven himself capable of holding his own in battle against the likes of Arthur Pendragon and later Meliodas, parrying all their attacks with ease. Hendrickson possesses telepathy as shown when talking with Vivian from long distance. Despite being defeated and supposedly killed by Gilthunder, Hendrickson appeared to be fully unharmed albeit his torn armor and right cutoff arm which he later reattached. Hendrickson possesses the black mark similar to Meliodas', the only difference is that only his right eye is dark colored and it somehow restored his youthful appearance after drinking the demon blood as a result of his experiments. Hendrickson's strength seemed unparalleled compared to Meliodas' as shown destroying the entire castle in one strike, sending groups of Holy Knights flying caught in his swipe. The black mark can also help Hendrickson heal serious wounds and even reattach dismembered limbs almost immediately but some of them remain according to Meliodas. After injecting himself with the blood of the Gray Demon, Hendrickson loses his youthful side but gained an enormous power-boost and a dangerous light-type ability that blasts anything away to nothingness as shown when grazing Ban's upper body and assumes a hybrid form with features of the Red and Gray Demons.

Experimentation on the corpse of the Red Demon allowed Hendrickson to decipher parts of dark magic, giving him the Blood Awaken power over the New Generation. By chanting an ancient incantation ("Memeza nemeza...memenomaza") into a demonic skull-shaped ring,[2] he can force the demon blood within the New Generation Holy Knights to go berserk. The New Generations are swallowed by their negative emotions, causing them to transform into grotesque monsters.[3]

As a Druid, Hendrickson can sense demonic beings or their powers and use techniques of his own kind including forbidden ones that involve the resurrection of the dead, he can also use some Druid techniques able to exorcise and defeat demons such as Purge which could instantly defeat a Gray Demon. Hendrickson can also heal injuries rather easily by channel his power; although his healing ability was limited in comparison to those of other individuals like Elizabeth, being unable to undo the curse that Zeldris placed on Merlin, he proved able to heal Gilthunder from a mortal wound inflicted by Zeldris, though wounding himself in the process.

After years of experimentation with the corpse of a Red Demon, as well as drinking the Red Demon's blood, Hendrickson gained both the physical and magical abilities of that demon, receiving demonic powers like manifesting their mysterious power of darkness. He also gained access to knowledge of various demonic enchantments, including Hellblaze.

After injecting himself with the blood of a Gray Demon, both his natural and demonic powers increased significantly, transforming his body in the process, gaining rapid regenerative abilities, wings for flight, as well as the magical abilities exclusive to the Gray Demon species.

After unsealing the Coffin of Eternal Darkness and releasing the Demon Clan, Hendrickson was affected by the process, which removed his Ash-Grey Demon form as well as all of his other demonic powers and abilities, effectively turning him human once again.

He uses a short sword with a blunt-tipped blade and a round pommel at the bottom of the hilt.

Hendrickson and Dreyfus were best friends in the past, as he playfully scolded him for sleeping in broad daylight as a result of Dreyfus' nightmares and have good times together. Until the time when Dreyfus asked Hendrickson to help him kill Zaratras, his personality has changed drastically and their friendship seemed to drift apart. Although it's implied that he still deeply cares for Dreyfus as his friend as he started crying when Dreyfus/Fraudrin made an appearance before unsealing the demon clan. He later made vow to free Dreyfus from the demon's influence no matter the costs.

Retrieved from "https://nanatsu-no-taizai.fandom.com/wiki/Hendrickson?oldid=151700"
Community content is available under CC-BY-SA unless otherwise noted.