Hendrickson's Magical Research Facility is a large castle within the capital of the Kingdom of Liones. It was once Merlin's old castle which is filled with rare magical artifacts.

This magical research facility was once owned by Merlin, Boar's Sin of Gluttony until 10 years later after the legendary group of knights' betrayal. Hendrickson began to use the castle for his research and experiments on the Red Demon and the Gray Demon underneath the structure to produce the Old and New Generations among Holy Knights and Apprentice Holy Knights and his attainment of Demon powers including Hellblaze.

Beneath the castle, Helbram and Guila led two Apprentice Holy Knights Jericho and Twigo brought before Hendrickson who showed them the demon's corpse, and explained about the benefits of gaining greater power by drinking its blood before offering the two to drink, which only Jericho survived and welcomed to the New Generation.

Later after stealing the Dragon Handle from Meliodas back at Vaizel, at the castle's caverns, Helbram proceeded with the ritual to break the powerful seal on the Demon clan to set them free as Hendrickson proclaims the beginning of the return of chaos into Britannia only to see the Demons barely even manage to get through their Demon Realm and realizes that they need the last key to finally break it.

During the Seven Deadly Sins' infiltration into the kingdom's capital, Helbram led Great Holy Knight Dreyfus and his assembled team of Holy Knights composed of Gilthunder, Howzer, Guila, and Jericho after being forced to answer Dreyfus' question of the Sins' arrival and lied that they were heading to steal the castle's rare magical items for funds while trying to lead him away from discovering the demon's corpse underneath the castle. When they felt the tremor, the Holy Knights venture towards underground and discover Diane, the Serpent's Sin of Envy beneath the castle much to their surprise. Then it exploded into a full-blown battle, resulting to half-destruction of the castle.

Later, after Hendrickson recaptured Elizabeth Liones, they ventured around the ruined castle where the princess took the dagger among the scattered items and intended to kill herself to foil the druid's plans of reviving the Demon clan but this was interrupted by Griamore who was later joined by his father. Then father and son battled Hendrickson together, causing more damage to the castle as they traded blows and magical attacks but accidentally hurt Elizabeth who got caught in Dreyfus' misfire of his strongest Break technique. After the father and son duo were defeated with Dreyfus' death and Griamore's incapacitation, Meliodas arrived and battled Hendrickson while Hawk took Elizabeth to safety. After Diane saved Hawk and Elizabeth from Hendrickson's attack, King joined the fray as he had his Guardian to smash the druid so hard into the ground, completely destroying half of the castle.

As five of the Seven Deadly Sins faced Hendrickson while the rest of the Holy Knights who recently recovered from their battle with the New Generation, surrounded the castle to bar the Great Holy Knight's escape. During the battle, the ruins of the castle revealed the demon's corpse and Ban's furious powerful smash upon Hendrickson caused heavy tremor felt by the Holy Knights surrounding it. Meliodas, Ban, King and Gowther continued to pursue Hendrickson while Diane stay put due to her large size and inability to fit in the hole Ban created. There they discover Hendrickson with the Gray Demon which he injected its blood into himself and gained a huge power-boost and a whole new demonic looking appearance of both red and gray demons and grazed Ban leaving his lower body intact much to the Sins' shock.

At the area of the Timespace Junction she controls, Lilia rebuilted the castle using her memories from the place and use it to do her researches to accomplish her plan of destroying the world. 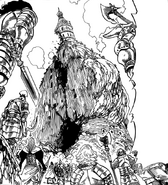 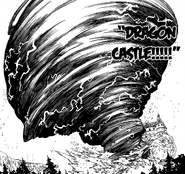 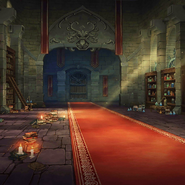