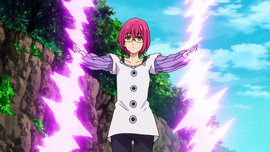 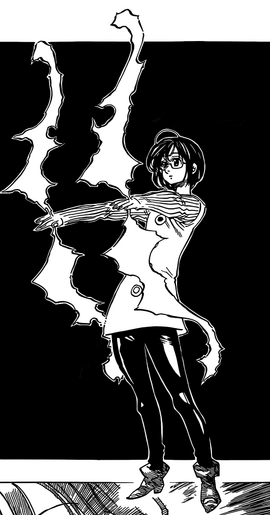 Herritt is a pair of luminous, purple energy bows that appear at Gowther's will. They are not fired in the conventional sense where one would need two hands in order to hold and draw the bows, but are instead magically drawn, allowing them to be fired in tandem.[1]

Herritt allows Gowther to utilize Invasion to its full ability by greatly extending the range of his power. This is best shown when he uses it to rewrite the memories of dozens of Holy Knights during the Seven Deadly Sins infiltration of the kingdom.[1] During his confrontation with Diane, he summoned Herritt to render anyone with a spirit level below 400 within a three mile radius unconscious.[2]

Retrieved from "https://nanatsu-no-taizai.fandom.com/wiki/Herritt?oldid=151462"
Community content is available under CC-BY-SA unless otherwise noted.