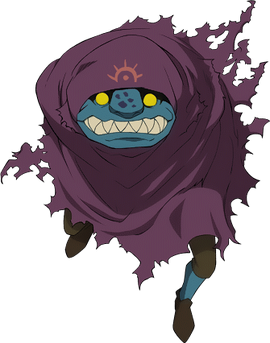 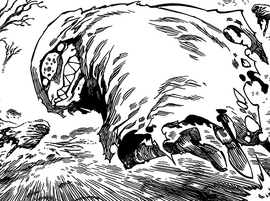 Hide-and-Seek「ハイドアンドシーク」, also known as Prankster Imps「いたずら小鬼 Itazura Kooni」, are creatures that inhabit the forests of Britannia and have the ability to perfectly impersonate someone.

Hide-and-Seeks are small imp-like creatures with a large bulging nose between two eyes at the sides of their head, comparatively long and large mouth, and pointed teeth. All of the imps appear to wear shoes, and a ragged cloak with a hood. The Hide-and-Seek from the Forest of Awepine wear hoods with animal ears-like shapes.

When they impersonate someone, they completely and accurately copy all of the individual's appearance.

After the Seven Deadly Sins were framed as criminals by the Holy Knights, Diane hid in the Forest of White Dreams and forced the imps to serve her, lest she go on a rampage.[1]

When Meliodas, Hawk and Elizabeth entered the Forest of White Dreams looking for a member of the Seven Deadly Sins, the imps, believing they were Holy Knights, tried to confuse and stop them by impersonating Hawk. However, Meliodas, punched all the copies including the real Hawk without mercy, which lead them to impersonate Elizabeth, and unsuccessfully try to capture Meliodas.[2]

All of the copies of Elizabeth claim that they will do anything to prove that they are the real one, and the young man, after playing with that declaration a bit, tells them to jump as high as possible. All of the copies except the real one did so, since Meliodas had stolen the Elizabeth's panties beforehand and she was embarrassed to jump. The Sin of Wrath then quickly defeats all of the imps.[3] The imps immediately run toward Diane, leading the three toward her, and still believing that Meliodas was a Holy Knight, apologize to her that they let a Holy Knight come through.[4] After Diane decided to leave with Meliodas, the imps were relieved, since they could finally live in peace after ten years.[1]

The Hide-and-Seek were present with the returning Fairies, witnessing the arrival of Ban, King and Jericho, although angrily accused the Grizzly's Sin of Sloth for abandoning the Fairy King's Forest and left Elaine to die 700 years ago as they threw rocks at him but were driven off by an enraged Oslo.

Several Hide-and-Seek were found as monsters placed inside the labyrinth in Vaizel as a test for the participants of the Great Fight Festival. Hawk, Diane and Elizabeth, who found themselves lost in the labyrinth, meet them, who take on the appearance of Meliodas. The imps demand that they return the forest that was destroyed. Seeking to know if the real Meliodas was among them, Hawk asks them what is the part they like most about Elizabeth, just so they can tell her which part of her body they want to eat. After being attacked, Diane refuses to attack Meliodas, so the three flee. At the end, they are saved by Howzer and Gilthunder who make the imps move away.

Hide-and-Seek have the ability to perfectly mimic every living creature with their Hide and Seek power.[5]

Whilst Diane was staying in the Forest of White Dreams, the imps served her, as she threatened to go on a rampage if they did not do so and they were afraid of her strength.[1]

Retrieved from "https://nanatsu-no-taizai.fandom.com/wiki/Hide-and-Seek?oldid=140756"
Community content is available under CC-BY-SA unless otherwise noted.