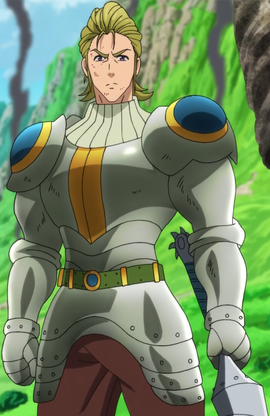 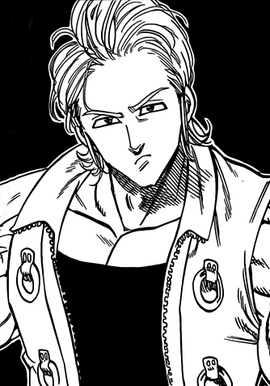 Howzer is often depicted donning a standard set of Holy Knight armor. He has dark blonde hair, usually styled into a messy quiff. In his time at Vaizel during the Fighting Festival, Howzer wears a sleeveless wrestler-type civilian outfit, along with purple pinstriped pants and brown boots. 18 months after the Holy War, Howzer became older and grew a beard on his jawline.

Howzer demonstrates a lot of self confidence and optimism, only considering the benefits of the "New Generation" of Holy Knights despite the mysteries surrounding their origin.[2] In addition, he is quite naive and stupid, dismissing Ban and Meliodas, who had entered the Vaizel fight festival under the names, "Baan" and "Meliodafu", respectively, as the  Deadly Sins, because of their obvious name changes, despite him knowing the physical traits of both.[3] After his battle with Diane, he grows more and more attracted to her every time they meet. Despite his usual easy-going personality, Elizabeth has said that Howzer does not stop once he becomes serious in a fight.

Howzer is somewhat of a fight enthusiast, eager to fight in the aforementioned tournament, and to witness the Deadly Sins' battle personally. He has also shown a shy side toward women, and does not like harming them, no matter what their strength.

He is quite respectful as he pointed to Diane as Matrona that her top is unbuttoned and she should cover it, even though he got booed by the unhappy pervy men in the audience for it.

During his childhood, Howzer was the childhood friend of Gilthunder, Griamore, Margaret, Veronica and Elizabeth as they always play together. Howzer was taught how to be a knight by Dreyfus and became a Holy Knight after the Seven Deadly Sins were framed.

Howzer, like all Holy Knights, is extremely powerful, being able to easily defeat an army of more than three thousand along with Gilthunder. He also wields a spiraled lance with a small spur on the other end in conjunction with his abilities.[4]

Gilthunder and Howzer are childhood friends with very different personalities but they appear to work very efficiently as a team during battles. Howzer often comedically expresses envy whenever Gilthunder acts intimate with Margaret. They were close friends growing up, getting into all sorts of trouble together.

Howzer and Griamore get along well, having grown up as childhood friends. Howzer enjoys teasing Griamore about his relationship to second royal princess Veronica. Griamore claims that during their younger years, he would always get looped into whatever crazy scheme Howzer and Gilthunder cooked up and end up getting scolded by his father. However, the veracity of this story is questionable, as Gilthunder refuted it; intead claiming that he was the one who would always get dragged around by Howzer and Griamore.

Howzer knew Dreyfus ever since he was young, having been trained by him. According to Howzer himself, during this time, Dreyfus used to constantly scold Howzer and his friends whenever they would mess around the capital.

When they were younger, Hendrickson would always step in and come to the defence of Howzer and his friends whenever one of Dreyfus's scoldings got too severe. After the events of the Kingdom Infiltration Arc, Howzer departed on a quest with Gilthunder and Griamore to uncover the truth behind Hendrickson and Dreyfus's treacherous actions.

Howzer met Diane at Vaizel during a fight tournament, but did not realize who she is because she shrunk during the event. When they battle, Howzer did not use his full power because he doesn't like to hurt girls and was being modest toward Diane until she showed her true strength and Howzer started to respect her. After Vaizel, Howzer started to grow feelings for the young Giant, but his duty of being a Holy Knight put him in a hard spot. He is moved by a severely injured Diane in the fight with Helbram, and musters up strength to fight for her and protect her rather than fight against her. Gowther assessed that the only reason Howzer was so closely affiliated with the Sins was Diane. Despite Howzer's feelings for her, Diane treats him as a good friend.

Howzer has developed a rivalry with King, as both often compete for Diane's attention. They are seen fighting and quarreling over her in almost all of their interactions.

Retrieved from "https://nanatsu-no-taizai.fandom.com/wiki/Howzer?oldid=150398"
Community content is available under CC-BY-SA unless otherwise noted.