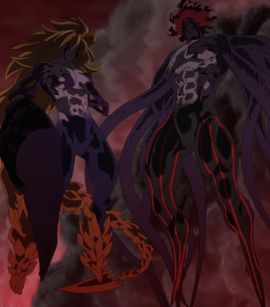 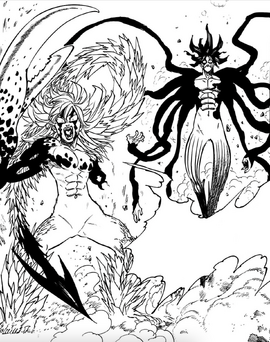 Indura「インデュラ Indyura」 is the true nature of demons that possess seven hearts and a power level exceeding 50,000.[1]

Indura are varied in appearance, resembling monsters, chimeras, or mutated animals. Over time, the creatures will begin to morph into more inhuman forms to the point where they become unrecognizable from their original appearance.

Despite their origin as a member of the Demon Clan, they are essentially wild creatures without the ability to reason, having exchanged that as well as their original form for power and only have a desire for destruction.[2]

In order to attain and transform into their Indura form, a demon must have a power level of at least fifty thousand; a demon with a power level lower than that will die due to not being strong enough to survive the strain of the transformation[3]. In order to make a pact with the Darkness within them, the Demon would have to sacrifice six of their seven hearts to initiate the transformation.[4][5] If successful, the resulting Indura would have gained massive amounts of strength and power at the cost of losing the ability to think rationally. They become beasts that follow their basic instincts to destroy everything around them.

The Indura resulting from Ten Commandments members who had their decrees bestowed upon them by the Demon King are called Induras of Favor (主恩, Shuon). They are noted to have a power level far above regular Indura.[7]

The Induras are noted to possess absolutely massive power; when Derieri and Monspeet transformed into their Indura Forms they both possessed enough power to overwhelm and nearly kill three of the Four Archangels of the Goddess Clan, who match the Ten Commandments in terms of raw power. Even Meliodas, the former leader of the Ten Commandments, stated that the only "real" way to defeat them was to simply allow them to rampage to their heart's content until they simply kill themselves from exhaustion, further proving the depth of their power.

Elizabeth was able to stop Derieri and Monspeet because of her massive power due to being the Supreme Deity's daughter and only succeeded due to Sariel and Tarmiel helping her in the end, even then they weren't able to kill them and could only revert them back to their original forms.

Retrieved from "https://nanatsu-no-taizai.fandom.com/wiki/Indura?oldid=152599"
Community content is available under CC-BY-SA unless otherwise noted.