Episode 23 (S2)
Infinity「, Infiniti」 is a unique power possessed by the Boar's Sin of Gluttony, Merlin.

Merlin's power of Infinity is a unique and incredibly powerful ability that allows her to keep her spells active until she herself chooses to dispel them. That said, it is very likely that any magical effect she incites will live on, even after Merlin herself dies, should she fail to undo it at that point. No matter how powerful the spell, Merlin only needs to cast it once for her power to take effect.

It is extremely versatile and can be used in numerous ways to make her spells everlasting, including freezing others in ice eternally, causing flames to burn endlessly, or even stopping her own time. It allows her to escape the effects of powers which alter her time or her age, such as Grayroad's commandment.[1]

Its effects are so outside the norm of most magic, that it's been called "unfair" and Merlin is openly accused of "cheating" for possessing it.[2]

Through an enchant, Merlin can also apply Infinity into a spell, to continously channel magical power to it, making exponentially more powerful, to even overcome spells of the level of Chandler's.[3]

The very nature of this magic is so unique and powerful that it is even recognized by the rulers of the Goddess Clan and the Demon Clan, so much so that both believed possessing this power on their side would turn the very tide of the war in their favor. 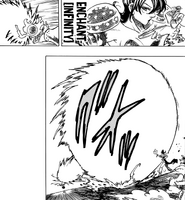 Merlin using Enchant: Infinity to give power infinitelly to her Exterminate Ray