Chapter 56
Invasion「, Inbeijon」 is the inherent magical power shared by both the Goat's Sin of Lust, Gowther, as well as his creator, the original Gowther, of the Ten Commandments.[1] It gives them the ability to manipulate memories and the soul.[2]

Invasion is a power described as a "long-range type" that affects the mind and spirit.[3] Dreyfus commented that it may be the most dangerous of all the powers possessed by the Seven Deadly Sins due to its ability to manipulate memories and affect the spirit.[4] Given its status as "long-range", it's stated that the user may be vulnerable to close-range attacks.[5]

According to Gowther, Invasion allows him to imprison an opponent in an illusion of their fondest memory. The illusion can be triggered either directly with physical contact, or indirectly by conjuring his Sacred Treasure Herritt, a magical bow and firing an arrow of light into the target. Gowther is also capable of releasing his light arrows without the use of his bow. While entrapped in the illusion, enemies are incapable of conducting any movement; rendering them defenseless to incoming attacks.[6] Invasion also gives him the ability to enter a person's mind and converse with their subconscious, though he can be forcefully expelled. His body is also left open to harm while in another's mind.[7]

As this power allows Gowther to see into the mind, he can discern whether someone is lying.[8]

Since this power can affect the mind, one of its applications is to manipulate the nervous system in several ways, such as controlling the movements of an opponent, leave them unconscious or alter their senses. 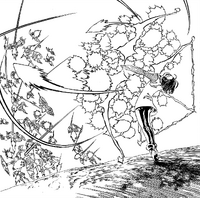 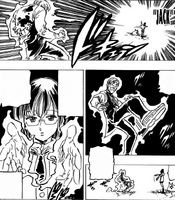 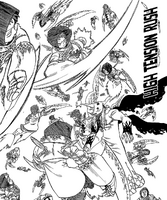 Gowther uses Kaleidoscope to create many illusions of King