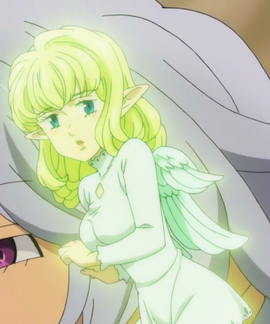 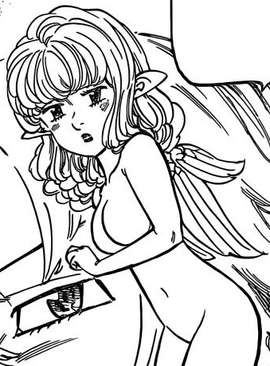 Deathpierce
Pleiades of the Azure Sky

Invisible「インビジブル」 is a fairy who only shows herself to Deathpierce and acts as his informant.

She is a very small fairy with angel-like wings and short pink hair. She appears to be nude, save for a pair of pink lacy stockings that cover her legs.

In the anime, she is a fully clothed, with a white dress and white stockings.

She is apparently very shy, only showing herself to Deathpierce and whispering to speak to him instead of speaking aloud, likely because she doesn't want anyone else to hear her.

Invisible was tasked with acting as his spy to survey the Ten Commandments actions, as was the only such spy to return. Later informed him and his group about the devastation in northern Britannia, Camelot's downfall, and the goings on at the Great Fight Festival at Vaizel.[1]

She has been friends with Deathpierce since he was a child and he is the only one she allows to see her or will talk to.

Retrieved from "https://nanatsu-no-taizai.fandom.com/wiki/Invisible?oldid=142328"
Community content is available under CC-BY-SA unless otherwise noted.