Jelamet「ジェラメット」 is a Divine Lance Corporal of the Goddess Clan. 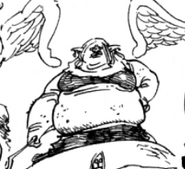 Like a number of other goddesses, Jelamet is a " beautiful" being which is why she was greatly angered when she possessed the "extremely ugly" Troll Queen. She has short blue hair that reached slightly below the neck while her widow peak parted her hair to frame her face. She is seen wearing lipstick and a diamond shaped choker.

The Troll Queen that she took possession over was an incredibly fat troll in a bikini top, much larger than regular trolls. Additionally with her possessing it, the Troll Queen gained a pair of goddess wings.

Although Jelamet believes her actual appearance to be attractive, she has a very horrible personality. As such, when she possessed the Troll Queen, she gained an outer appearance that matched her rotten character.

Jelamet claims to supposedly have been Elizabeth's close friend in the distant past. She however disapproved of Elizabeth's relationship with Meliodas, having warned her to stay away from him. As such, Jelamet considered that Elizabeth deserved to be cursed for breaking their clan's laws. Jelamet also considered the loss of her original body and her having to possess the Troll Queen as all being Elizabeth's fault. For this, Jelamet had planned to find and punish Elizabeth as she saw Elizabeth's curse as not enough to satisfy her anger.

She was also obsessively in love with Mael, who she called her Lord, even though it appears to be one-sided. She initially refused to believe Mael had been killed by Estarossa, but blamed his fate on Elizabeth since it was her and Meliodas's relationship that started the First Holy War. Upon sensing Mael's Sunshine Grace she ran to the source, only to learn it was Escanor. She was devastated at this realization and lost all will to fight, since she reasoned Sunshine would not have found a different host if Mael was still alive.

Despite her initial wrathful and malicious disposition, Jelamet has shown to have a good side to herself. This is seen where after she lost the will to fight, she willingly removed her technique inflicted on Zaneri and Jenna before peacefully returning to her slumber.

Jelamet used to be a Divine Lance Corporal-class goddess. She fought in the ancient Holy War 3,000 years ago and claimed to have been close friends with Elizabeth, even warning the goddess of her relationship with Meliodas.

Ultimately, Jelamet lost her physical body along with the rest of the Goddess Clan in order to seal the Demon Clan and end the Holy War.

She is the one actually behind the Troll Queen incident that the Seven Deadly Sins dealt with 11 years ago. Back then, she possessed the Troll Queen and with some trolls that she brainwashed, decided to take over a druid altar in the druid homeland of Istar in order to take advantage of the connection of the altar with the Celestial Realm to free the goddesses and take control of Britannia. She intended to occupy the altar until her real body reconstructed. However, Meliodas and the Seven Deadly Sins appears to stop her.

In the cave, Jelamet is confronted by Meliodas who was accompanied by Jenna and Zaneri. Jelamet declares her intentions to kill Meliodas and take his head to Elizabeth, but Zaneri tries to reason with her. However, Jelamet dismisses her and Jenna as defectors and uses Job no Shiren to steal Zaneri's voice and Jenna's sight.

Meliodas orders that she undo her magic and hit her with a simple clap that sends her flying. Jelamet manages to use Ark, but Meliodas only insists that she release Jenna and Zaneri. Jelamet refuses accusing them both of treason for defecting and protecting him, crying out for her hatred towards Meliodas because of Mael's death. Zaneri manages to attack Jelamet with a lightning bolt that frees Meliodas from the Ark, who asks her forgiveness for not being able to stop the Holy War. There, Escanor appears and when she feels his magic, Jelamet confuses him with Mael.

However, seeing that it is Escanor, Jelamet understands that it is not Mael. Escanor tries to kill her, but Meliodas stops him. There, Jelamet assumes that Mael really died since the Grace that the Supreme Deity granted him found refuge in another creature. Thus, Jelamet leaves the Troll Queen's body and decides to return to the Celestial Realm and sleep alongside her brethren until the time her heart is relieved of grief.

Before she left though, Jelamet removed Job no Shiren from Zaneri and Jenna, returning their voice and sight respectively.

Jelamet is one of the many Goddesses who were restored several months after the New Holy War ended. At first weeping with joy to see that Mael was still alive after 3,000 years, the Archangel quickly consoled her. Jelamet then bows and ask him what will be the next "mission" of the Goddess Clan. It is not known exactly if Jelamet was one of the Goddesses who were manipulated by the Supreme Deity.