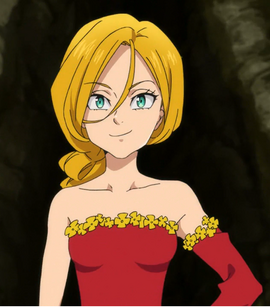 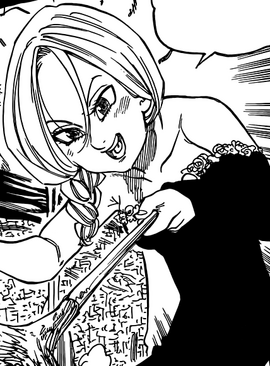 Jenna「ジェンナ」 is a former member of the Goddess Clan, as well as one of the heads of the Druids along with her sister Zaneri in their sacred land Istar.[1]

Jenna original appearance
Jenna has long blonde hair in a single braid. Wears a blue dress (red in the anime) with yellow flower designs on the chest.

Unlike her serious sister, Jenna is energetic and shows interest in outsiders, even teasing and messing with others. However, she tends to get annoyed when others disobey her orders or do something reckless. Jenna is shown to be somewhat forgiving, as she let Hendrickson back to their native land to train despite his Acid power.

During the Holy War, holding doubts about the war and feeling uncomfortable with the way the Goddess Clan saw things, Jenna and Zaneri escaped. Some time after their defection, they encountered the twin sisters who were the original owners of their current bodies. As the sisters were too damaged beyond their powers to save, they earned their permission to borrow their bodies and pretended to be human to escape the battlefield undetected. Several years after the end of the war, the sisters eventually become the heads of all the Druids, living in the sacred land of Istar.

Jenna and Zaneri were still heads of the Druids when the trolls and their queen came and attacked Istar which luckily, the Seven Deadly Sins came and saved the Druids, but destroyed their altar by mistake. However, Jenna wasn't too upset as she later forgave them and continued to lead the Druids along with her sister and new protector, Theo.

When the Seven Deadly Sins and their friends entered Istar once more for training and to regain Meliodas's strength, nearly everyone thought Theo was the head of the Druids, but to their surprise, he was their protector and fifteen years old. Jenna explained that she knew they were coming and let them in, and for amusement began to mess with Hawk. Theo and Jenna took the group to the Cave of Training to train for their upcoming battle against the Ten Commandments, revealing she let Gilthunder, Howzer, Griamore and Hendrickson in to train as well. During the training, Jenna guided the Deadly Sins and Holy Knights, but got annoyed when they'd mess up, or if they began fight one another. When the training was over, Jenna returned Meliodas's strength, though she was against it, and expressed shock when he went to "greet" the Commandments and give them a warning.

After the Sins went out to stop the Commandments and find Escanor, Jenna stated that despite them being a raucous group, she would miss them. Then she pointed out that Zaneri sabotaged Elizabeth's trial by not placing the seed in the pot. Zaneri broke down, revealing that she didn't want Elizabeth to stay close to Meliodas because she was Liz's reincarnation, and if Meliodas lost her again he might lose control.

Jenna is seen along Zaneri watching from Istar as the Demon King stands with a new, gigantic and monstrous vessel created from the same land of Britannia.

Jenna shown to be a high-level sorceress, as she is able to summon up many Amber for people to train and have very deep knowledge of creatures in the land. She claims to be able to use Ark, the archetypal magic of the Goddess Clan.

Retrieved from "https://nanatsu-no-taizai.fandom.com/wiki/Jenna?oldid=143093"
Community content is available under CC-BY-SA unless otherwise noted.