Amber
Black (as a Reactor)

Jericho「ジェリコ」 is one of the Holy Knights of Kingdom of Liones and later a follower of Ban of The Seven Deadly Sins. In her days as apprentice Holy Knight, she stationed at Baste Dungeon where Ban was held, and later a part of the New Generation after she drank the Red Demon's blood and survived. Her Power is Ice Fang, inherited from her late brother Gustaf. 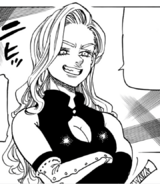 Jericho is a young woman of slim build, with light (lavender/silver in the anime) hair that is swept over the left side of her face and tied into a ponytail at the back. It's described as "sturdy" in her character profile. She occasionally wears her hair down, so that it falls to both sides of her face. One noticeable feature is that her lips are visible compared to other females without lipstick.

At Baste Dungeon Jericho wore a black coat over her armor, adorned with a cross on the left side and larger cross covering the back. Underneath her armor were similarly fashioned black clothes. Metal gauntlets covered her arms, while metal greaves and sabatons covered her legs and feet her armor didn't show much of her body shape as she lied that she was a man. Her current attire consists of a full body torso armor with a round opening at the chest area and a long skirt. Her undergarments are rose or pink and black colored.

Jericho is a proud and serious individual who desires to prove herself as a knight. She is stern in her command over the guards of Baste Dungeon and confident in her abilities to the point of arrogance at times[1], which led to her humiliation by Ban.[2] Jericho is revealed to have low esteem and possibly an inferiority complex due to being female, and disguised herself as a man to appear stronger and avoid ridicule. She also took on to use the masculine self-pronoun "Ore".

After drinking demon blood, Jericho became more comfortable about her sex, but also became darker in personality. She also tends to be rash and impulsive, often overcompensating. Along with embarrassed or flustered easily. She has a lot of care in her heart for others. Even though she is selfish at times, she goes well out of her way to help people, as she aspires to the ideals of a knight, even when she is not acting as one. She is also has been described as "easy-going".

In her childhood, Jericho argued with her older brother Gustaf, a Holy Knight, that she wanted to be a Holy Knight too, only to be met with negative responses from him which gave her a huge chip on her shoulder. The two of them come from a family of well-respected Knights, which likely accounts for their wealth and pride[3].

At some point, Jericho became an apprentice Holy Knight, trained intensely in swordsmanship, and was stationed at the Baste Dungeon under the Weird Fangs.

Jericho is a skilled swordswoman. She was able to move extremely fast and launch several slashes in an instant.[4] After drinking a demon's blood, Jericho's abilities were greatly increased; she was able to temporarily immobilized Ban with, while he easily defeated her previously. In addition, Ban was mysteriously slower to heal from a wound caused by Jericho's attack, despite his considerable regenerative abilities.[5] King believe she could have the power to slow down time for the wound to heal or might be an illusion power that creates a sensation.

After being reverted to normal by Ban, Jericho lost all of her powers as a result. She reawakens her power in a new form after her brother's death, with her ability revolving around ice manipulation.

Jericho possess a long sword which she uses in conjunction of her powers.

After unlocking her own magic, Jericho's Power Level improved enough for her to be able to defeat several Red Demons in the Holy War.

Jericho appears to greatly respect Golgius, addressing him with the honorific "Lord".

Jericho appears to respect Friesia (who was shown to be fond of Jericho in the anime) to some degree.

Jericho appears to highly respect Ruin, calling him with the honorific "Lord", probably out of fear of him considering the time in the anime when he appeared behind her, shooting down her doubts of the Weird Fangs' power to take on the Seven Deadly Sins.

Jericho and Guila worked as a team under Helbram during the Vaizel and Kingdom Infiltration arcs. They seem to have a friendly relationship with each other, as Guila was the first one to welcome her to the New Generation. Jericho is shown to care a lot for Guila, as she used a healing ball to heal her and was to be worried about her, and also held her close when they nearly died fighting demons. Jericho, however, seemingly respects conventions, especially Holy Knight traditions and orders from her superiors, far more than Guila does, and occasionally calls Guila out on any risky actions. When Jericho discovered Guila's necklace on Dale's corpse, she delivered the news with some hesitance. This showed how much Jericho cares for her, and how highly she regards Guila's feelings.

Jericho was dismayed when Guila betrays the Holy Knights to protect the Deadly Sins, and even tries to get her back to their side. Jericho calls Guila a "comrade". She also blushed and told Guila that she looked cute when they met after the Kingdom Infiltration arc in civilian clothes. Guila returned the Oth. Upon seeing Gowther with Guila, Jericho seemed genuinely disturbed by the situation, she carried that suspicion the next time she saw Gowther during the Great Fight Festival arc, speaking to him defensively when she asked him about his relationship with Guila. She hopes the best for her, telling her to pursue a peaceful life with Zeal.

Jericho and Gustaf are siblings, but are not on good terms. This is because in the past, when she told him of her ambition to become a Holy Knight like him, he told her to give up and stop embarrassing him. Regardless, she was devastated after his death.

After he humiliated her by stripping her down to steal her clothes in Baste Dungeon, Jericho sought revenge. She was, in fact, angry enough to drink demon blood in order to gain the power to beat Ban, but that grudge was destroyed when he saved her from becoming a full demon, and she developed an infatuation for him. In the second ova for Nanatsu no Taizai - in one of the shorts there shows a part where Jericho as a little kid asks Ban to marry her after asking a few other people as well, Jericho blushes when she is around Ban and tends to be shy.[7] The two of them have taken on a more platonic relationship, and he comforted her at Gustaf's funeral, as he views her as a younger sister.

Due to her liking Ban, she doesn't like her much. Also, Jericho thinks she has a better body than Elaine, but even so, while Elaine kept wanting to get rid of her, she was able to talk some sense to her, saying she had feelings for Ban. Nonetheless, as Elaine is the one Ban loves, she was willing to carry them both on her back to safety after they were attacked by two members of the Ten Commandments. Because of Elaine, Jericho gained a lot of respect for her, and she was able to say goodbye to her first love, after her resurrection.

Lancelot and Jericho have a teacher-student relationship. Jericho seems to harbour a certain attraction to him, leading to Lancelot thinking that she's a pervert. She seems to care deeply for him, though, as she follows Lancelot through a mysterious doorway in the rain.