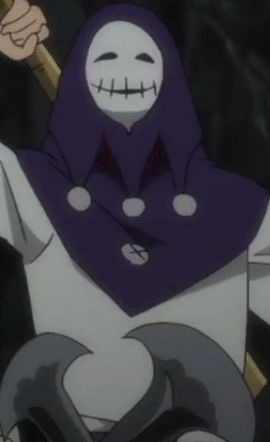 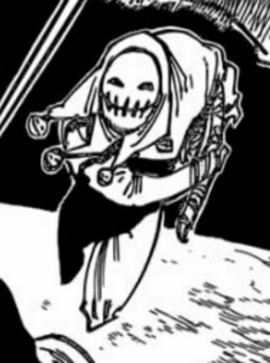 Jigumo「ジグモ Jigumo」 is one of the Assassin Knights of Malachia who joined the Great Fight Festival for an unknown purpose.

Jigumo is short and slime, compared to his brothers. He wears a jester-scarecrow kind of clothes and mask, with 3 bells hanging under his chin.

Jigumo and his brothers join the fight festival and defeat a Earth Crawler. He and Torah had to fight Elizabeth and Elaine. As the fight started, Jigumo thought it would be easy to defeat some girls and Torah agreed. As Torah jumped towards Elizabeth, Elaine quickly pushed him away. Using a smoke screen, Jigumo managed to separate Elizabeth from Elaine and Torah went for a kill, but Elaine easily defeated both of them. Then, Elizabeth appears, surprising Jigumo who was certain that the poison should have killed her. Elizabeth ignores him and ask him to move aside. While holding Torah, who was heavily wounded, the princess cures him completely with her magic. Elizabeth reveals the relationship between the kingdoms of Liones and Malachia, and that she is the daughter of the Liones king.

The Malachia brothers intends to reach an understanding with Elizabeth, but they are cut short when a big hole appears right below them, making them fall. Gloxinia states that there is no place for losers in the tournament.

Retrieved from "https://nanatsu-no-taizai.fandom.com/wiki/Jigumo?oldid=140038"
Community content is available under CC-BY-SA unless otherwise noted.