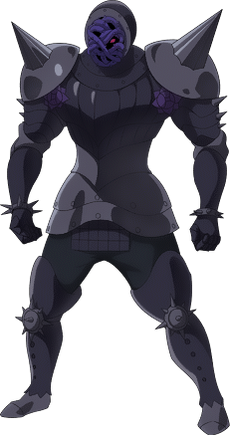 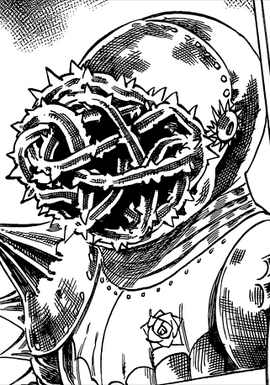 Jude 「ジュド」 is a member of the Weird Fangs, an order of Holy Knights stationed at Baste Dungeon who captured and imprisoned Ban. Jude is known to have tortured Ban mercilessly during the Fox's Sin of Greed's imprisonment.

Full Appearance
Nothing of Jude's facial appearance is known.

Jude's helmet has metal vines covering his face, and his shoulder plates have a large spike on each of them. On his left hand Jude wields a spiked shield that has a rose insignia carved onto the surface of it.

Jude is a serious and very cruel person, as he is willing to torture and kill people who prove useless to him.[1]

Five years before the beginning of the series, Jude and the three other members of the Weird Fangs confronted Ban. The resulting battle ended in the Sin capture and imprisonment in Baste Dungeon, where Jude remained as one of the dungeon's guardians and Ban's torturer.[2]

The guards that are guarding Ban mention that he along with the other Weird Fangs are at the Baste Dungeon.[2]

Jude is first seen inside the Baste Dungeon, along with the rest of the Weird Fangs, listening to Friesia informing them that she is going to launch the first offensive and kill both Meliodas and Diane herself.[3] Later, as Ban escapes from the dungeon, Jude stops him and states that he is going to die. When asked for the reason, the Holy Knight answers that since Ban had fulfilled his job of being a bait to lure out the captain of Seven Deadly Sins Meliodas, he is useless, and reminds Ban about who caught and tortured him.[1] He then engages Ban in combat, which results in him quickly stabbing him in the chest. He is shown to be confused and surprised when Ban removes the stake he was stabbed with and informs Jude as to the reason he allowed himself be captured. As he is then suddenly stabbed back with the same stake in the chest, he warns Ban that if the Seven Deadly Sins plot to overthrow the kingdom again, all the Holy Knights would wage an all-out war against them, only for Ban to comment that such a war would be exciting before killing him in front of Sennett.[4]

Jude, like all Holy Knights, is extremely powerful. He is also a considerably strong fighter as he was able to quickly stab Ban in the chest even without the latter noticing during their fight. In the anime, Jude briefly demonstrates a power related to shadows, having appeared before Ban, out of nowhere, from the ground.

Jude wields a spiked shield that has a rose insignia carved onto the surface with his left hand. He can use the spiked stake from his spiked shield to attack foes.[5]

Jude and Friesia are both members of the Weird Fangs.

Jude and Golgius are both members of the Weird Fangs.

Jude and Ruin are both members of the Weird Fangs.

Retrieved from "https://nanatsu-no-taizai.fandom.com/wiki/Jude?oldid=150326"
Community content is available under CC-BY-SA unless otherwise noted.