Episode 15 (S2)
Judgement「, Jajjimento」 is the power of the Pleiades of the Azure Sky leader, Assistant Great Holy Knight, Denzel Liones. It uses the opponent's guilt of killing the people depending on how many they came across and "judge" them.[1]

Judgement allows the user to take advantage of the opponent's guilt of the people they killed depending on how many they have came across in the past and "judge" them harshly upon their psyche which somewhat similar to Invasion's Nightmare Teller technique. 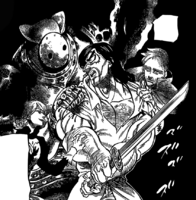