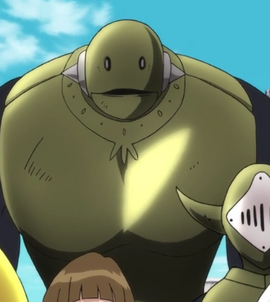 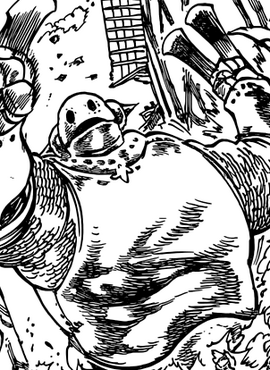 Kaide「カイーデ」 is a Holy Knight of Liones.

Kaide wears full body armor that covers much of his appearance, but he is shown to have a mustache. He appears to be much larger than normal people but still smaller than the Giants' Clan similar to Gowther in his enchanted armor.

Kaide is shown recklessly wandering the streets of the kingdom, and destroying in the name of "punishing bad children". He cares very little about the safety of the citizens caught in the wake of his destruction.

In the past, Kaide appeared to be concerned of his younger brother's future as he pressured Twigo to train harder if he really wanted to become a Holy Knight like himself.

When the three of the Seven Deadly Sins infiltrated the kingdom to save Elizabeth, Kaide intercepted Gowther and was about to "commence punishment" as he rampages which risked the lives of the citizens caught in his path until Slader, captain of the Dawn Roar, who was on his day off, swiftly took him down with his chain blade, sending him flying, shocking two other Holy Knights who pursued Gowther earlier. A bloodied Kaide was knocked unconscious as a result.[2]

Kaide was involved in the defense of the Liones capital when the Ten Commandments and their Demon Clan forces attacked. They confronted Zeldris and Fraudrin but were too outmatched and forced to retreat. However, this foolish action causes Zeldris' Commandment of Piety to enslave Kaide and his fellow Holy Knights as obedient slaves of the Demon King and by extension, the Commandment's holder.

Kaide's strength is unknown, but as a Holy Knight it can be assumed he is quite powerful. He wields two sword-claw gauntlets for melee combat.

Retrieved from "https://nanatsu-no-taizai.fandom.com/wiki/Kaide?oldid=147282"
Community content is available under CC-BY-SA unless otherwise noted.