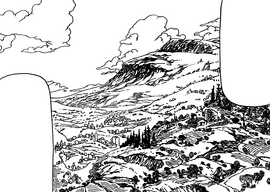 Beard of the Mountain Cat

Kaynes Village (ケインズ集落, Keinzu Shūraku) is a small village located within Britannia. It is located east of Fort Solgales and Bernia.

On top of a hill in the village, Meliodas is seen serving his customers in Boar Hat, when the infamous Rust Knight appears, frightening all the customers into fleeing. Meliodas confronts him and inquires as to who he is, before the Rust Knight falls unconscious; the fall removes the individual's helm and reveals him to been female. The woman, who awakes shortly after, is presented with one of Meliodas' terrible dishes which brings her to the point of tears.[1]

As she began to reveal that she was searching for the Seven Deadly Sins, the Beard of the Mountain Cat knights appear in an attempt to capture the Rust Knight, who they believe to be a member of the Seven Deadly Sins. The woman escapes from the back door, and as she is pursued by the knights, is ultimately not captured thanks to Meliodas and Hawk.[2] She then proceeds to explain to the two about the Holy Knights' recent coup d'etat, which resulted in the king being captured. She continues, informing them about the Holy Knights' forcing unwilling civilians to become soldiers, bring food for storage, construct castle walls, etc., and that insubordination had become a deadly offense.[3]

Suddenly, they are attacked by Twigo, who discovers the woman's identity as Elizabeth Liones, the third princess of the kingdom. After two attempts to escape from him, she then surrenders, not wanting to involve Meliodas in her matters, believing him to be a normal civilian. Just as Twigo delivers the finishing blow, however, the young man unveils his identity as one of the Seven Deadly Sins, the Dragon's Sin of Wrath, and easily defeats Twigo. As Twigo orders his men to request for reinforcements, Hawk Mama, with the Boar Hat on her head, rises from the ground, blasting Twigo and his men away, and transports the establishment.[4]

Retrieved from "https://nanatsu-no-taizai.fandom.com/wiki/Kaynes_Village?oldid=85329"
Community content is available under CC-BY-SA unless otherwise noted.