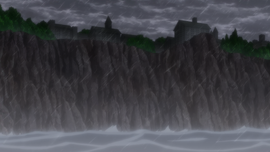 Castellio「カステリオ Kasuterio」 was a kingdom located within Britannia that was destroyed over thirty years ago.

Not much is known about this kingdom, but at some point it was destroyed by barbarians around 35 years ago.[1]

The Kingdom of Castellio was briefly seen in Escanor's flashback that resulted from Gowther's Nightmare Teller. There, Escanor reminisces his childhood where he remembers being bullied by his older brother Daymond before subsequently awakening his power Sunshine and breaking Daymond's arm. Declared a monster, Escanor is chased out of the kingdom and, aided by Rosa, manages to escape across the sea in a barrel.

Retrieved from "https://nanatsu-no-taizai.fandom.com/wiki/Kingdom_of_Castellio?oldid=135887"
Community content is available under CC-BY-SA unless otherwise noted.