Chapter 29
Danafor「ダナフォール, Danafōru」 was a kingdom located within Britannia. It was once known to rival the Kingdom of Liones in terms of power, before being destroyed by Meliodas when he lost himself to his wrath.

Before its destruction, Danafor rivaled Liones in terms of military might and faced invasions from other countries of Britannia. Liz, a young knight from another country, led an attack on Danafor but was unsuccessful. She was sentenced to be executed, until Meliodas decided to rescue her, much to the anger of  his fellow Holy Knights. Meliodas and Liz fell in love and the Holy Knights eventually warmed up to her. However, one day, Fraudrin appeared at the kingdom, nearly destroying it and killing many people, including Liz. When Meliodas saw the incident, he went berserk with the grief of his loved one's death, destroying all of Danafor with his demon powers, and nearly killing Fraudrin .

Cain Barzad, who had recently returned from an unspecified mission, returns only to discover that his country was completely obliterated, leaving on ruins left behind, leaving him in great sorrow. Those who escaped the horrific tragedy wandered across the continent, while honoring the memories of their lost kingdom. Elizabeth Liones is mentioned by Veronica Liones to have hailed from Danafor and was adopted by King Bartra Liones into the royal family of Liones.

When Howzer argued about the Seven Deadly Sins being on the side of the Bloodline of Darkness in the prophesied Holy War they were preparing for, Dreyfus mentions Danafor and how Meliodas had supposedly destroyed the entire kingdom by himself.

During their match at the Vaizel Fight Festival, Cain accuses Meliodas of destroying his beloved country from hearing years of rumors. He angrily hurls fireballs at the Dragon's Sin of Wrath until the latter tells his old friend that the he failed to protect Danafor, but promises that he was not behind the country's destruction. The elderly Holy Knight of Danafor subsequently decides to trust Meliodas' words and forfeits the match in happiness.

Meliodas, the perpetrator of Danafor 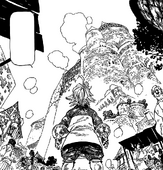 Danafor before it's destruction in the manga