Episode 1
Liones「リオネス, Rionesu」 is a kingdom located in northern Britannia, and the original assembly of The Seven Deadly Sins. During the reign of the previous monarch, Bartra Liones, it had seen a coup d'etat by its Holy Knights,[1] an invasion by the Ten Commandments, and the New Holy War. It is currenty ruled by Meliodas and Elizabeth Liones, whereas its current Great Holy Knight is Howzer.

The kingdom is a large and powerful country which is protected by its knights and its order of Holy Knights. It was built over the vestiges of the Fairy King's Forest from Ancient Britannia.[2] The Seven Deadly Sins were once an active group of knights in the kingdom before being framed for the murder of the Great Holy Knight Zaratras.[3]

The kingdom held a great treasure called Horn of Cernunnos which could summon a Goddess, but had since been destroyed by Meliodas.[4]

The kingdom also had an alliance, a non-aggression pact, with the Fairy Clan before the burning of the Fairy King's Forest thirty-six years ago.[5]

Ten years after the framing of the Seven Deadly Sins, Bartra Liones, although realizing that a predicted Holy War would soon occur, ordered all the Holy Knights to lay down their swords in an effort to avoid war. However, believing that the war was inevitable and that protection of the kingdom was their duty, the Holy Knights captured the king, with the current Great Holy Knights, Hendrickson and Dreyfus, assuming command. They also started enslaving and forcing the citizens to participate in military efforts while justifying their enslaving with the fact that the citizens were being forced to do something for their own protection.[6]

Three of the Seven Deadly Sins - Meliodas, Ban, and Gowther - attempted to invade the Kingdom of Liones in order to rescue Elizabeth who was kidnapped. During their attack, an army from Camelot approaches Liones with their new king, Arthur. Hendrickson's Magic Research Facility building was completely destroyed during a battle between Diane and Dreyfus' Holy Knights.

Battles between the Seven Deadly Sins and the Holy Knights have caused significant destruction to all parts of the kingdom, forcing the regular knights to evacuate the citizens away from the battle as they could. The Deadly Sins and Holy Knight later join forces to stop Hendrickson and free Bartra and Elizabeth. After freeing them, Dreyfus was stripped of his rank due to his crime and Bartra was taken to Camelot for treatment as he was ill. But Hendrickson, after recovering from defeat, appeared by destroying a large section of the castle and awakened the New Generation's demon blood, turning them into Demons themselves, and began a rampage within the capital of Liones and its people, catching the Holy Knights and knights off guard. Various skirmishes broke out in the entire capital as the Holy Knights and knights immediately fought the Demons who were once their comrades but suffered heavy losses in the ensuing chaos to which Gustaf called it like hell.

Throughout the chaotic battles between men and demons, the entire civilian population were evacuated by groups of Holy Knights while their comrades fought against the Demons together with the Seven Deadly Sins. After the kingdom was freed from Hendrickson, the people of Liones slowly rebuild the kingdom and the Holy Knights went back to normal.

When the Ten Commandments  begin their conquest of Britannia, they eventually invade Liones after several months. When the Holy Knights are unable to stop them or evacuate the royal family, the intervention of the Sins Meliodas, Escanor and Merlin gets that the Commandments are expelled from the kingdom, two of them being definitely defeated. The kingdom suffers several damages, mainly the castle that is destroyed completely. However, Merlin manages to repair everything by herself in one night. Several civilians and knights fell victims to the Piety commandment and moved to Camelot as servants of the Demons. After these are released and returned to the kingdom by the Seven Deadly Sins.

When the Holy War against the Demon Clan finally takes place, Liones forms an alliance with the Four Archangels to be part of Stigma and fight against the demons. Liones becomes the headquarters of the allied forces. When the forces are divided for the confrontation, a group of Holy Knights, the Defensive Force, is designated to protect the kingdom in each entrance.

Ten years after the defeat of the Demon King and Cath Palug, Bartra Liones abdicted from the throne due to his age and appointed Meliodas as the new king due to his relationship with Elizabeth, and perceptions on him as hero in the kingdom. Meliodas also moved the Boar Hat permanently into the city. 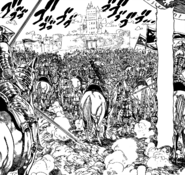 An army from Camelot marching towards Liones 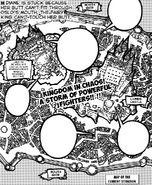 A map of Liones

Liones being attacked by Demon Hybrid