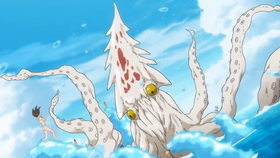 Great Demon Beast Kraken「大魔獣クラーケン」 is a rare giant monster that appear once every one-hundred years.

Kraken are able to swim at high speeds, they are dangerous enough that when spotted in the ocean seashore towns must be evacuated. Its ink is poisonous.

Retrieved from "https://nanatsu-no-taizai.fandom.com/wiki/Kraken?oldid=139010"
Community content is available under CC-BY-SA unless otherwise noted.