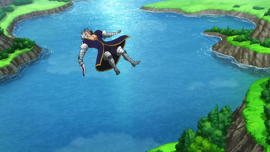 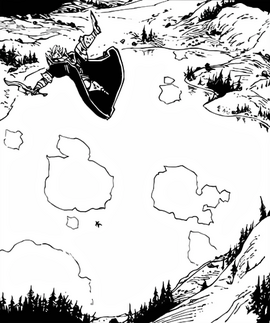 Britannia, south-west of the Kingdom of Liones

Lake Penace「ぺーネスの湖畔 Pēnesu no Kohan」 is a lake situated to the south-west of the Kingdom of Liones.[1]

The settlements around Lake Penace have a history of producing Penace Cider, and it is one of many alcoholic beverages stocked by Meliodas in the Boar Hat.

Lake Penace is mentioned by Escanor when he asks Ban of its location. After confirming the position of the lake, he quickly attacks Estarossa and sends the Commandment flying in the direction of the lake. Using Cruel Sun and Pride Flare, the Sin of Pride manages to severely wound his opponent whilst drying up the entire lake with the heat from his techniques.

Retrieved from "https://nanatsu-no-taizai.fandom.com/wiki/Lake_Penace?oldid=139991"
Community content is available under CC-BY-SA unless otherwise noted.