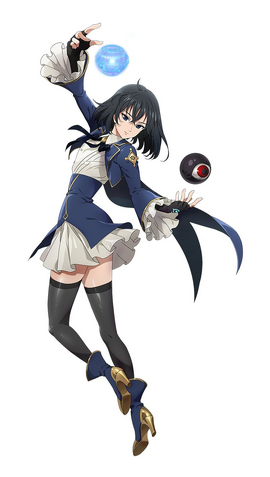 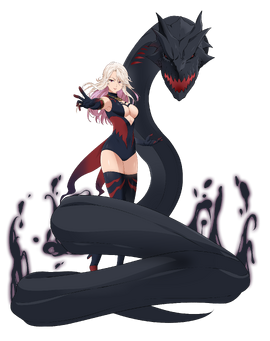 Mage
Leader of the Seven Disasters

Lilia「リリア」 is a mysterious young mage and a former apprentice of Merlin. She is an original character made for Grand Cross mobile game. She is the founder and leader of the Seven Disasters.

After activating her Awakened form, Lilia's eyes gets a lighter tone and her hair becomes longer, now reaching her back, and turns light blond. Her body also changes in the transformation, assuming a more curvaceous shape.

Whenever she overuses her Awakened powers and is forced back to her original form, Lilia's hair temporality becomes a merge of her usual hairstyle with the Awakened one, keeping the light blond bangs, inversely similar to Shin's hair.

During her times as Merlin's apprentice, she was described as a timid pupil, however, thoughout the years after rejecting Merlin as her master, she developed an arrogant, prideful and merciless persona.

After being defeated by the Sins and Rimuru, Lilia leaves part of her arrogance aside, seeing that she's unable to win a battle against the Seven Deadly Sins without help.

When she's with Valenty, Lilia often demonstrates a softer and more emotional side.

For unknown reasons, she dreams with the destruction of the entire world. When she's interrogated by Rimuru about any grudge against her world, she tells him that holds no grudges and just wants to prove herself as the most powerful. However, as noted by Shin, Lilia seems to keep secrets about this dream of hers, which she doesn't talk about even with her allies.

Lilia used to be one of Merlin's pupils before the Seven Deadly Sins were framed for Zaratras' murder, however, after getting angered by the Boar Sin's underestimation towards her. She left the mage's side and continued to learn magic by herself for the next few years, promising to, one day, surpass Merlin as a magician.

Years later, Lilia, now believing to be more powerful than her former master, decided to fulfill her mysterious dream of the world's destruction by summoning a demonic entity known as "The Ruler of the Storms". Fueling her summoning magic by sacrificing dozens of humans she deemed unworthy of living, Lilia casts the spell to summon the demon. However, she ends accidentally summoning Rimuru Tempest and his friends, Milim Nava and Benimaru. Initially confusing the slime with the demon, she attempted to convince him to fulfill her wish, but, shortly after, she realizes her mistake and tries to kill him. However, being unmatched to Rimuru's powers, she decides to escape.

Later, after the Sins and Rimuru's allignance, Lilia begins experimenting on the creatures that came across Britannia due to the space-time disruption caused by the summoning, including Lizardmen and Orcs from a different time period of the Jura Forest, stripping them of their sentience and transforming them into brainwashed minions. She then casts a forbidden spell that causes any damage they take to be converted into energy and transferred for her.

After the group manage to find her hideout, she reveals the curse placed on the creatures and resurrects the Orc Disaster Geld to absorb more of the group's powers. Having absorbed enough energy, Lilia manage to unlock her Awakened form and attempts to kill the Sins and Rimuru. However, she is defeated and, before being able to escape, releases a destructive tornado on a last attempt to kill her enemies.

Later, weakened and converted back to her normal form, she realizes that is no match to the Seven Deadly Sins alone and decides to look after allies that share her ideas and mindset. Then, after some failed attempts, she is able to summon a mysterious woman named Valenty, her first ever friend and new ally to her goal's achievement. The Sins track Lilia down, but she and Valenty escape after the Weapon Researcher awakes a mysterious power. Shortly after, Lilia decides to create her own group to confront the Sins and bring the calamity to the world, entitled as The Seven Disasters, with herself and Valenty being the founding members.

Some point after Valenty's departure to explore Britannia, Lilia remained, unsucessufully, attempting to summon more allies for her group, however, after reuniting with Valenty in the caves of Balleno  she is able to summon the brand new member of the Disasters, Eastin Amabyllis with a magical crystal obtained from her teammate during her time in the gnomes' village.

Some time later, while searching materials with Valenty in order to work in new allies' summons, she is surprised by a sudden attack of Merlin, being captured by her in the process. Before being taken away, she asked Valenty to search Eastin for help. Later,  after Eastin and Mono sucessfully invades her space-time prison she is able to escape and help her friends in a battle Gowther and Ban which where waiting to ambush her friends. With Eastin's help, Lilia is able to defeat both Sins and escape once more, reuniting with Valenty and welcoming Eastin and Mono as the new members of the Seven Disasters.

Times later, she was able to summon new members for her team, the Dungeon Conqueror, Shin, and the Lunatic Destroyer, Roxy. However, for unknown reasons, she started to lose control of her powers after the new members' summoning.

While attempting to summon the final member of the Seven Disasters, Lilia mentally crosses between worlds until encountering Camila, a guardian deity who's in grief after failing on protecting her world from destruction. The mage then convinces the woman to allow to be brought into Britannia, promising that, if she helps to achieve her dream of her own world's destruction, a brand new world where the former deity could be happy will appear. However, due to Camila's immense magical power, Lilia was unable to complete the summoning and the otherworldy girl is teleported to a random forest in Britannia. While searching for Camila, she ends up cronfronting Merlin, Ban and Meliodas in order to take her potential final member with her. After a brief battle, Valenty appears and causes a strong earthquake with one of her devices and the Disasters takes Camila to the Dimensional Junction. There, Lilia welcomes her final member and take her to talk about her plans on destroying the world.

After completing her team, she, along with Valenty, started to research about alternatives to get a better control of her Awakened form and, at the meantime, its giving magic lessons to Roxy and Mono.

Lilia is Merlin's former apprentice. Much like Vivian, she despites Merlin mostly due to her own arrogance hadn't allowed her to absorb Merlin's advises during her magic lessons, making her desire to surpass her to grown even more. Lilia describes her current feelings towards Merlin as a mix of admiration and envyness.

From all the fellow Disasters, Lilia is closest to Valenty, as they both were each others' first friend and ally.

Despite Eastin's doubts about Lilia's capacity to be her leader, Lilia seems to hold no grudges against her, visible when she didn't care to join forces with her in the battle against Ban and Gowther or when she simply ignore Eastin's insults when she lost control of her powers.

As the leader of the Seven Disasters and a former apprentice of Merlin, Lilia is extremely powerful, as noted when she managed to kill groups of several Holy Knights with ease and effortlessly control powerful monsters from Rimuru's world such as the Orc Disaster Geld. According to Merlin, she is talented in summoning and evacuation magic, being able to summon creatures from another worlds and teleport herself and other people to long distances. Also, like her former master, she posses a magical orb used by her to channel most of her spells. Also, as a Druid, she posses some level of healing magic, visible on her spell Eroica (エロイカ).

Also, Lilia is able to awaken into a mysterious power where she materializes her magic in a black dragon. Due to this transformation, her powers raises drastically to the point to resist the combined efforts of the pre-Commandments saga Seven Deadly Sins, Rimuru Tempest, Milim Nava and Benimaru. In this form, she is also able to create tornadoes of massive destruction, strong enough to destroy a whole mountain. Lilia, with Valenty's aid, is currently searching some way to better control this form.

Retrieved from "https://nanatsu-no-taizai.fandom.com/wiki/Lilia?oldid=154155"
Community content is available under CC-BY-SA unless otherwise noted.