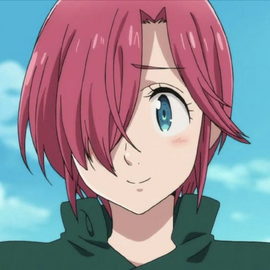 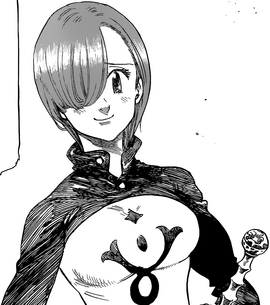 Liz「リズ」, fully Elizabeth「エリザベス」, was a Holy Knight of Danafor and the 106th incarnation of the Goddess Elizabeth. Orignially from an enemy nation of Danafor, Liz was saved by Meliodas when her mission in the kingdom failed and was about to be sentenced to death. Liz then spent the remaining of her life in Danafor with her savior and joined the rank of its knightly order, until her death by Fraudrin before the kingdom's complete annihilation.[1]

Liz was shown to wear a full body armor with no helmet and has short, pink hair covering over her right eye. As mentioned by Cain, she looks almost identical as her reincarnation, Elizabeth Liones.

Unlike Elizabeth, Liz had shown no trust towards other people due to being sold as a slave to an unknown kingdom and had always clashed with Meliodas for being a pervert towards her and thought he was after her body. But as Liz grew closer to Meliodas she eventually became his lover. Liz was also shown to be tough and brave, but Cain mentioned she had a charm-like aura with a gentle voice. Liz appeared to dislike Meliodas' perverted nature, as, unlike Elizabeth, would hit him for groping her which he usually dodged, but later got used to it, but only in private and not in public. Despite her cold nature at first, Liz was revealed to be kind hearted and caring, after she got used to the people of Danafor, as well as showing great love for Meliodas. Even as she died, she smiled to Meliodas to keep him calm and not worry about her.

Liz was originally a knight of an enemy kingdom of Danafor. One night, she attempted a night ambush attack, but failed and was sentenced to death in Danafor. However, Meliodas, the leader of the Holy Knights, decides to save her, stating that anyone who objects will become his enemy. He brings Liz to his house, where she began to think that Meliodas was after her body. As she was initially sold to the enemy kingdom as a slave, she lacked trust in others, but soon the two grew more intimate and became lovers. Liz offered Meliodas a sword which he rejected, stating that he does not need one as he does not desire to kill anyone.

During the destruction of the kingdom of Danafor, she was murdered by the demon Fraudrin.[2] Fraudrin recognized her as the goddess Elizabeth and intended to use her blood to open the Coffin of Eternal Darkness. Ignoring the meaning of his words, Liz fought him but ended up being stabbed in the chest by the demon. Meliodas declared that his failure to protect her and the citizens of Danafor is his sin as a member of the Seven Deadly Sins.[3] Before she passed away, she asked Meliodas to promise her that he must never forget the principles he stand by, even if he forgets who he is. Meliodas' anger and sadness for his lover causes him to lose control of his power and completely obliterate Danafor.

After her death, she reincarnated as a baby, the lone survivor of the destruction of Danafor. The child was given to the King of Liones by Meliodas, so he can raise her as one of his daughters.

Liz is introduced during a brief flashback of her dying amongst the ruins of Danafor, as Meliodas stands in front of her, and asking him to promise her that while he can forget who he is, he will never forget the principles he stands by. When she dies, Meliodas hugs her while crying, grieving for her death.[4]

Her abilities and equipment are currently unknown. However, it is believed she was strong enough to be a Holy Knight and was able to go on a dangerous mission to Danafor.

As a reincarnation of the Goddess Elizabeth, Liz could potentially use any of her abilities if she regained her past memories, but she died before manifesting either.

When Liz was captured as she was planning to ambush Danafor, Meliodas saved her from her fate. At first Liz disliked Meliodas, she thought he just wanted to fondle her body. But later fell for him and even became his lover. Even though she acts tough around Meliodas, she deeply loves him, happy to have met him and lived a peaceful life together with him, even though it was short. Liz shown to be kind and caring towards him, assuring him that they will meet again even after she died and tend to worry about him when she was in pain, just like what Elizabeth would do.

Not much is known about the two, but during Meliodas trial, it seem the two get along pretty well.

Retrieved from "https://nanatsu-no-taizai.fandom.com/wiki/Liz?oldid=155393"
Community content is available under CC-BY-SA unless otherwise noted.