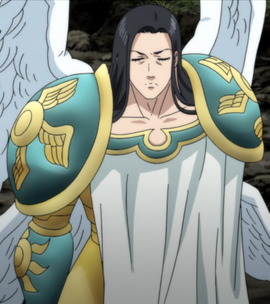 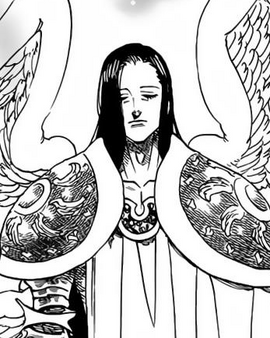 Leader of the Four Archangels
Leader of Stigma

Ludociel is a tall, muscular man with long dark blue (black in the anime) hair and four angelic wings protruding from his back. He wears full-plated golden armor with a set of robes adorned on his body. He normally keeps his eyes closed, but when oppened they are shown to lack pupils.

Ludociel seems to be polite, kind, and welcoming shown when the humans enter Stigma's safe haven, he rejoices how the Great War was soon to come to an end. Also, despite his immense power and status among the Goddesses, Ludociel does not discriminate inferior Goddesses, at least his family, as shown by the fact that he never laughed at his younger brother for being a coward and unable to harm a single insect and instead had a good relationship with him. However, his kindness seems to end where the Demon Clan is concerned, wanting to ruthlessly destroy them in the name of bringing peace to the other races.

According to Nerobasta, Ludociel lost his family and friends in pursuit of Stigma's goal, and thus cannot afford to fail. He is a man willing to give up everything in order to achieve a single objective, and Gowther compares him to Meliodas in that regard.

Surprisingly, despite Elizabeth's betrayal of the Goddess Clan, Ludociel apparently has no grudge towards her, as he acts cordially towards her. However, Ludociel possesses some humor, as he called on Elizabeth not wanting to face Meliodas due to Meliodas now being evil.

Although his actions may at times be vindictive, it was all in order to end the Holy War and bring upon peace in Britannia. Ludociel seems to hold his deceased friends in a high regard, as shown by how after seeing how Hendrickson's behavior reminded him of a friend of his who died protecting someone he cared for, Ludociel decided against using Hendrickson as his vessel, healing and even asking him to live. This reminder was also able to snap him out of his initial despair over how Meliodas had absorbed all Ten Commandments, as he bravely fought Original Demon to buy time for Merlin to stop the time of Meliodas' cocoon.

However despite Ludociel's normally stoic and condescending disposition to others and his more sadistic and malignant tendencies, Ludociel does indeed have a more caring side to him in regards to his family as seen in his genuine love and care for his younger brother Mael, as seen where he actively assisted and trained him during his childhood to increase his abilities and happily reassured him of his potential and power, causing the latter to idolize and love him as his older brother and when Mael told him of his romantic love and attraction to Elizabeth (Goddess), Ludociel was more than happy to assist his younger brother in setting them up together and assured him that he'd help him in his persuite in any way he can.

Ludociel is first seen welcoming the humans when they arrived at Stigma's base which is located in the Fairy King's Forest.[4] He was aided by the Divine Lance Corporal Nerobasta, and she seems to have acted as his assistant in his schemes. There, he declares his intentions to end the Holy War by exterminating the entire Demon Clan. Elizabeth is reluctant towards his ideas, saying that he himself said that there should be peace among all the clans. Ludociel replies that the demons are nothing but disgusting beings who can not be compared to them, telling Elizabeth that she must sever her ties with Meliodas, who is the heir of the Demon King. When Elizabeth leaves, Ludociel tells Nerobasta not to go after her since he can not do anything to prevent the plan that has already started.

When the Ten Commandments appear in the forest, Ludociel reveals that he had been the one who kidnapped hundreds of demons including innocent civilians and had locked them inside a gigantic Ark to use them as bait to attract the Commandments and eliminate them. After revealing them, Ludociel then proceeds to eliminate them all.

When Sariel and Tarmiel fail to eliminate the Commandments, Ludociel decides to join the battle, ordering Nerobasta to protect the gate. There, he manages to incapacitate the demons without problems, forcing two of them to assume their Indura transformation, managing to stand up to the Archangel. When Elizabeth intervenes, Ludociel tries to convince her to help him defeat them, but she declares that she will save them. Ludociel insists that they must be eliminated to obtain peace and tries to convince Sariel and Tarmiel to support him, but the other two Archangels end up helping Elizabeth to finally free the Commandments from their transformations. Ludociel pretend to stop them, but Meliodas interfires to avoid him disturbing Elizabeth. Ludociel then tries to end Monspeet and Derieri while they are vulnerable, but is stopped by Drole and Gloxinia.

Sometime later upon the conclusion of the Holy War, Ludociel lost his physical body like the rest of the Goddess Clan and was sealed away in a modified Druid Altar within a chasm near the sight of where Danafor was built upon. He laid dormant there for more than 3,000 years.

As the leader of the Four Archangels, Ludociel is extremely powerful. His mere presence is enough to startle King (while in Gloxinia's body) and Diane (while in Drole's body).[5] King states that he possesses an immense amount of magic power and that his power is on par or even greater than the Ten Commandments.[6] Possessing superior intelligence, magic power, and charisma, Ludociel reigns supreme amongst the Four Archangels.[7] His younger brother and the strongest of the Four Archangels, Mael, states that he possesses the same level of power as Meliodas.[8]

Like all members of Goddess Clan, he has a pair of wings that grants him the ability of flight. He has shown the ability to summon his wings at will.[9]

While using Margaret's body, Ludociel is still extremely powerful. He easily pierces Vivian's neck without being noticed,[10] fires a massive Ark beam at Zeldris through the tip of the rapier he wields,[11] and later brushes off Zeldris' Dies Irae attack as if it were mere "child's play".[12] In his original body, Ludociel's power is far greater than when he uses a vessel, as shown when he not only fights with the Original Demon on equal grounds, but overwhelms him on a few occasions.[13]

Ludociel possesses immense levels of durability and endurance, receiving only minor injuries and able to continue fighting after taking multiple hits from Derieri (who destroyed an entire forest with a single swing of her tail) in her Indura form.[14] He is also extremely skilled in swordsmanship, as shown when in Margaret's body, he pressures Escanor with his sword skills,[15] and fights evenly with Zeldris who is known to have the fastest sword speed in the Demon Realm.[16]

Ludociel has been bestowed a Grace by the Supreme Deity known as Flash「 Senkō」.[19] This power allows Ludociel to move at immense speeds which appears as a form of teleportation.[20]

While inside Margaret Liones' body, Ludociel's power levels are as follows:

Mael is Ludociel's younger brother. While Mael was looked down by others for being unable to harm an insect, Ludociel always encouraged his younger brother and never laughed at him. Ludociel hoped that Mael would surpass him, feeling proud when he became the strongest of the Four Archangels. Ludociel also promised to try to arrange things between him and Elizabeth. After Mael seemingly died, the mere mention of his brother caused him to look angry at Hendrickson. He seems to lament his brother's apparent death.

Upon Gowther's Spell wearing off and his true memories of Mael returned to him, Ludociel expressed ecstatic joy at realizing that his young brother was alive, so much so that it even rendered him completely mentally weakened and vulnerable, effectively loosening his hold on his mortal host Margaret Liones and allowing Hendrickson to expel the Goddess from her body with Purge despite the massive gap in their power.

Though never acting much differently with her than with another of his allies, seemingly being ignorant of Nerobasta's feelings, Ludociel is actually aware of her feelings.[22]

In the past, Ludociel was respectful to Elizabeth for her position and power. However, Elizabeth's ideals of peace frequently clashed with Ludociel's wishes to exterminate the Demon Clan. Ludociel considers Elizabeth naive and absurd for believing that both clans can live together and that she can love a demon like Meliodas.

After meeting Elizabeth reincarnated in the princess of Liones, Ludociel still acts towards her as he used to 3,000 years ago since he is aware that Elizabeth's curse is still active. The two complained over Meliodas and his brothers but the two eventually came to a decision to form an alliance. Ludociel suggests to Elizabeth that her mother might lift her curse if she helped them defeat the demons.

At the end of the battle with the Demon King, Elizabeth and Ludociel manage to make peace and Ludociel admits that he was also fed up with the war and the conflict between the clans. When Ludociel vanishes, Elizabeth wishes him to find peace.

Retrieved from "https://nanatsu-no-taizai.fandom.com/wiki/Ludociel?oldid=153990"
Community content is available under CC-BY-SA unless otherwise noted.