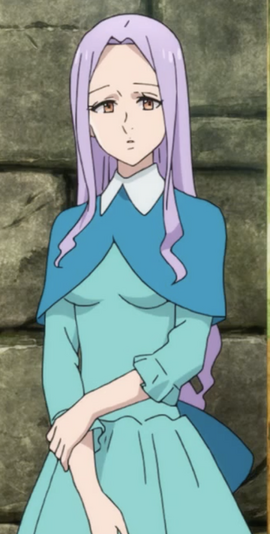 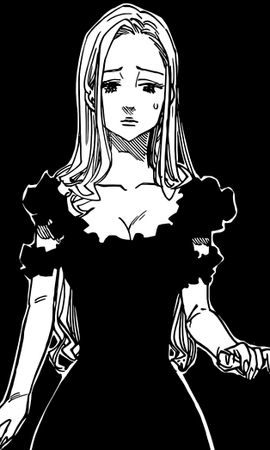 Margaret Liones「マーガレット・リオネス」 is the first princess of the Kingdom of Liones, the eldest sister of the Veronica (the second princess) and Elizabeth (the third princess and Margaret's adoptive sister).

Margaret is a pretty young woman with slightly wavy waist-length indigo hair that is split on both sides and brown eyes. While being imprisoned, she wears a short-sleeved long black dress with frills.

Margaret is a gentle and kind young woman who believes that the Seven Deadly Sins are the greatest group of knights specially assembled by her father and that the Holy Knights are the traitors for attempting to overthrow the kingdom, just like Elizabeth Liones. However, Margaret appears to be cowardly as Vivian claimed that she surrenders to be imprisoned rather than helping her father like her younger sisters Elizabeth and Veronica. However, it was proved untrue as it was revealed that Margaret was being held hostage by a creature called a Chimera.

In her childhood, Margaret made a boy named Gilthunder promise to protect her at all times as a knight should to his lady and Margaret gave her earring to Elizabeth Liones on her 15th birthday. When the Holy Knights overthrew her father, King Liones, she was forced to be imprisoned. During the Kingdom Founding Day festival, Margaret oversaw Gilthunder's uncle, Dreyfus and his partner Hendrickson poisoning Gilthunder's father, the Great Holy Knight Zaratras, killing him to her horror. Margaret went and told Gilthunder everything about Zaratras to his shock, until they were found out by Vivian who took Margaret hostage by using a Chimera to keep Gilthunder in line and serve the Holy Knights.

Margaret possesses no superhuman abilities or equipment. However, when Margaret sets off with Dreyfus and Hendrickson in search for Gilthunder and Vivian, she wears a regal noblewoman's dress with breastplate armor and gloves and a cape, and wields a rapier although she had little skill on wielding it and swings the weapon wildly.

When Ludociel possessed her body, he remarks of Margaret having this much affinity with his magic power befitting as his perfect vessel.

Elizabeth loves her adopted sister very much and admires her kindness and gentleness. Margaret appears to love her as well and gave her, her earring.

Margaret and Veronica have slightly different views on the Holy Knight and the Seven Deadly Sins, but despite this, Margaret cares greatly for Veronica and grew extremely upset and angry when she knew about her death.

Gilthunder acted as Margaret's personal knight during their childhood. However, Margaret began to despise the Holy Knights, including Gilthunder, for betraying the kingdom and overthrowing her father. At the same time, Gilthunder remains mindful and considerate of her. However, after finding out Gilthunder's true action and what Meliodas told her, Margaret soon forgave Gilthunder. Margaret's true feelings for Gilthunder is that she is in love with him and he reciprocates as the two kissed prior towards him leaving the kingdom to repair the damage he caused.

She cares deeply to his well-being, being horrified when Vivian took him hostage and she was more than willing to have Ludociel possess her to find him.

Margaret and Vivian have a mutual hatred towards one another. Due to Vivian's obsession towards Gilthunder, she took Margaret hostage for more than ten years to force Gilthunder to do her bidding, but she was later freed thanks to Meliodas.

Retrieved from "https://nanatsu-no-taizai.fandom.com/wiki/Margaret_Liones?oldid=150335"
Community content is available under CC-BY-SA unless otherwise noted.