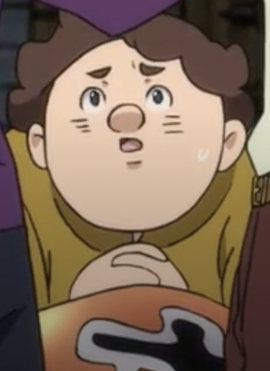 Marmas「マルマス」 is a Holy Knight. He led Guila and Jericho in the assault on Vaizel.[1]

Like many of the Holy Knights, Marmas is shown to be cruel and lacking compassion for the innocents who are caught up in his conflict with the Seven Deadly Sins. This was best demonstrated when he targeted Diane in spite of her attempts to rescue an injured man.[2]

He has a habit of speaking in broken sentences and sings "Don-Don Cha-Cha Don!" when activating his power.[3]

Marmas was among the Holy Knights who attacked the castle where the Seven Deadly Sins were after they were framed.[4]

With the Seven Deadly Sins arriving in Vaizel to take part in the annual fight festival, Hendrickson orders Marmas to lead an assault on the town in order to capture Elizabeth, along with Meliodas and the mysterious broken sword he carries.[5]

Riding on large, flying manta ray creatures, Marmas led a small group of New Generation Holy Knights made up of Guila and Jericho hastily towards the town of Vaizel.[6] After their arrival, the three immediately engage in battle with the Seven Deadly Sins, jumping from the strange, flying creatures to the town below.[7] While Guila and Jericho deal with Meliodas and Ban, Marmas makes his way over to the Great Vaizel Rock to head off Diane before she can claim her sacred treasure. While Howzer and Diane speak beneath the rock, Marmas walks over to greet them and discloses that he is leading the New Generation Holy Knights in the attack on the town. As Diane attempts to save an injured man crushed beneath the rubble of a house, Marmas activates his power which increase the gravity surrounding Diane tenfold. Diane manages to throw the injured man to Howzer before the ground collapses beneath her, leaving Howzer to confront Marmas over his actions.

As Howzer mourns for Diane, Marmas senses a great power that rivals that of Helbram's. He leaves to aid Guila and Jericho in their fight but is stopped by Howzer, who questions why he used his power to attack the unresistant Diane and endanger an innocent civilian. Marmas replies that Diane is a dangerous criminal plotting to overthrow the kingdom, and that the deaths of a civilian or two means nothing in the name of the greater good. Howzer retorts, asking Marmas who the greater criminal is between the giantess who heroically put herself in harm's way to protect a civilian or the "roly-poly" who indiscriminately kills innocent people. Insulted by Howzer's "roly-poly" comment in reference to his appearance, Marmas attempts to fight Hasuer, but is surprised by the unexpected appearance of Hawk Mama, who throws Diane's clothing down the chasm she had previously fallen into.[8] As Marmas tries to shoo away Hawk's mother, a large fist swings down, crushing him against the ground.[9]

Diane, having climbed out of the chasm, greets a relieved Howzer and asks him to escape with the injured man and the "roly-poly". He complies and uses his power to escape Vaizel's destruction with Marmas in tow.[10] In the aftermath of Diane's immensely destructive attack, Howzer dumps an unconscious Marmas on the ground and leaves to have the injured civilian treated.[11]

Later on, after Ban and King aided the Holy Knights in stopping the New Generation rampage, Marmas joined the rest of the Holy Knights in surrounding the castle ensuring that Hendrickson will not escape while the Sins battle the Great Holy Knight. Soon after the Sins and then the Holy Knights were easily defeated, Marmas was given the plan given out by Gowther to attack both Meliodas and Hendrickson long enough to build up the former's ultimate Full Counter technique: Revenge Counter as Marmas used Hyper Gravity: X30, angrily yelling at Hendrickson for trying to break his pure heart. When Hendrickson threatens to kill Marmas, he panics but Meliodas interrupted it. Continuing with the attacks, Marmas tells his fellow comrades that he's running out of power.

Witnessing Hendrickson's defeat, Marmas and the rest of the Holy Knights watch in awe of Meliodas' ultimate technique and fall from the sky. Later on when King Bartra Liones, recently recovered, returned to Liones with Merlin, Marmas and his comrades quickly bent their knees before their king, feeling ashamed for committing atrocities towards the people they swore to protect and blindly following Hendrickson and his evil plot all in the name of the Holy War, demanding heavy punishment for their sins only for the king declare that they'll dedicate their power and lives to restore the kingdom and prevent the same mistake from happening to avert the Holy War.

Marmas participates in the battle to defend Liones from the Ten Commandments assault.

He witnesses the start of the battle between Escanor and Estarossa. Due to the heat emanated by Escanor's power, his armor begins to melt, so he has to regretfully take it off.

Some townspeople under Zeldris commandment effect stabs Marmas with knives in the back and chest, and without the protection of his armor, he passes away immediately.[12]

As Marmas was seen leading the New Generation Holy Knights in their assault on the town of Vaizel, it can be assumed that his strength rivals that of Guila and Jericho, if not surpassing them.[13]

Marmas wields two metal clubs into battle, which he uses when activating his power by performing a strange song and dance, evoking the image that he is playing a pair of maracas.

Retrieved from "https://nanatsu-no-taizai.fandom.com/wiki/Marmas?oldid=143524"
Community content is available under CC-BY-SA unless otherwise noted.