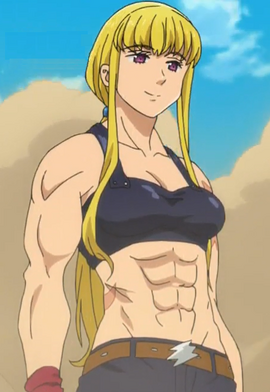 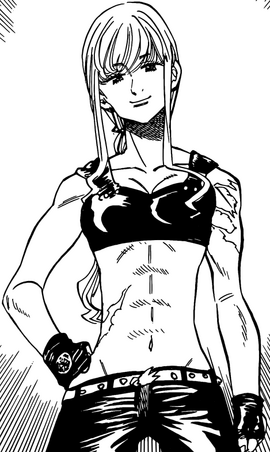 Fang of the Great Earth

Matrona「マトローナ」 is a former warrior chief of the Giant Clan, as well as a mentor to Diane and Dolores.

Like most members of the Giant Clan, Matrona is much larger than a human. Her body is toned and muscular, but retains its feminine shape. She has purple eyes and blonde hair with short bangs.

Fifteen years ago, she wore a blue camo cloth that covered her bust and was cut along her body.

In the present, Matrona wears a dark-colored tank-top and pants. Her bangs are longer. She has a wooden peg foot where her right foot used to be, as it was cut off by Zalpa to stop the poison from spreading through her body.

Matrona is a proud giantess, which is a common trait among giants. She is willing to fight for humans as a mercenary, so long as payment is involved. She is merciless towards her enemies, but honors and respects her opponents once they have given her a good battle. She believes that defeat in battle is worse than losing. Her ideology is that members of her clan need to be strong, which is why she pushes both Diane and Dolores to their maximum potential. Despite her values, she is shown as a caring individual who struggles to project her feelings to others. However, this is easily shown by honoring Diane's parent's request and taking care of her in their stead.

However, her prideful and ruthless warrior attitude has changed over the past 15 years, having been saved by Zalpa, the same man Diane let go free instead of killing. This teaches her to value life, and she becomes kinder. Matrona also became more motherly, as she raised two children - Sol and Della. However, Matrona remains strict toward Diane whenever she acts silly or does not take things seriously.

Diane, Dolores and Matrona were hired as mercenaries to battle against an invading army of savages. The savages had also hired a giant, the western warrior chief, Dumbelbas. Matrona challenged Dumbelbas in the midst of the battle, which led to the latter's death. Upon their return, Matrona scolded both Diane and Dolores for their pathetic display in the battle. After scolding them, she continued to train Diane and Dolores, pushing them to their limits to enhance their strength. Nearing the end of training, she tells Dolores than she could have children instead of fighting. Later on, she speaks to the village elders about Diane's hidden potential, stating that she will make her into the greatest giant warrior in history. When Diane left, Matrona ordered Dolores to fight off some bandits which led to the latter's death. Diane punched her after hearing of this news, bruising her slightly, and Matrona punched her back. She proceeded to lecture Diane about how she should act, as a proud member of the giant's clan before leaving her alone.

The next day, Diane and Matrona were hired by the Holy Knights of Liones as mercenaries to annihilate some savages where they met up with Gannon and his troops. Matrona noticed the humans had siege equipment and grew concerned with their current situation. Their mission turned into a trap. It was a ruse Gannon had plotted to gain reputation by killing Matrona. Diane and Matrona engaged in the battle against the traitorous Holy Knights. In the midst of the brawl, a poisonous bolt was launched at Diane, but Matrona blocked the bolt with her leg. This severely crippled the warrior chief who then knocked off Gannon in his mid-gloating and broke half his teeth. Despite being weakened by the poison, Matrona used the last of her strength to kill Gannon and 330 other Holy Knights before supposedly dying. Diane mourned for Matrona's death before being captured by the Holy Knights of Liones and arrested under false crimes perpetrated by the survivors of Gannon's fiasco.

After the battle, Zalpa, a savage whom Diane had spared in a previous battle, found her body and treated her wounds for three days and nights without any rest.

She would later come to develop feelings for the savage as a result, and decides to live together with him and his two children, Sol and Della. At some point after this, Matrona had her crippled right leg replaced with a wooden peg leg with the help of Zalpa.

Around a decade later, Matrona got drunk and went on a rampage in Vaizel, leading to a local prohibition of giants.

While Diane was battered around by Galand and Monspeet, Matrona appears, somehow having survived the deadly poison and ambushes the demons. She knocks Monspeet away and traps Galand with her creation magic. After trapping Galand, she walks over to Diane, and punches her in the stomach. The latter was knocked unconscious and Matrona avoids further confrontation by seemingly traveling through the ground. She manages to save Diane from the Ten Commandments, although she sustained some minor wounds through Galand's attacks.

Matrona takes Diane to Zalpa and his family, and teaches her Drole's Dance. She treats his children like a motherly figure. While Zalpa gave them permission to fish by themselves in a shallow river, she checks on Diane. Suddenly after, a Blue Demon attacks the children. Matrona intervenes in time to kill the demon and save the children.

After learning about the Great Fight Festival that promises grant any wish to the winner, Matrona decides to head to Vaizel to help treat their wounds with help from Diane.

Upon reaching Vaizel, Diane and Matrona discover a giant maze. Matrona tries to use her magic to destroy the maze, but the magic of the maze's creator proves to be superior to her own, which surprises Diane. The two are forced to go through the maze and ends separated by the traps and monsters.

Matrona manages to reach the end of the maze, being received by two of the Ten Commandments.

As the festival begins, Matrona and Diane are surprised to hear that one of the Commandments is Drole. As all participants are divided in teams of two, Matrona is paired with Oslo.

When Escanor and then Meliodas attack Drole and Gloxinia, Matrona ends up being taken along with everyone else as a hostage by Drole in their hands on the ground. Inside, all are forced to consider retiring. When Matrona insists on staying for Sol and Della, Diane tries to convince her to trust her and that they will be fine if they escape.

Matrona is then teleported to Liones along with the others by Gilfrost. There, all observe through a crystal ball the fight of Meliodas against Drole and Gloxinia.

When Meliodas is confronted by the rest of the Ten Commandments, Diane shows Matrona that despite the immeasurable power they possess, they would never have helped Sol and Della.

Along with the rest, Matrona can not do anything but mourn to see how Meliodas is killed by Estarossa.

After Della and Sol are healed by the princess Elizabeth Liones, Matrona decides to move along them and Zalpa to the Fairy King's Forest to keep them safe.

A month after the events in Vaizel, Matrona has a good moment dancing along with her family and everyone in the forest. There, all falls victim of a hypnotic trance used by Drole and Gloxinia to kidnap Diane and King.

Matrona was present along with other giants and fairies when Drole and Gloxinia declared Zeldris their departure from the Ten Commandments.

When the Fairy King's Forest is attacked by the Demon Clan, Matrona directs the other giants and fairies to defend the forest.

After this, Matrona goes along with the other fairies and giants to meet with the Search-and-Destroy Force and join on their way to Camelot. Matrona presence with the rest of the forces the power of darkness that looms over the battle that took place in Camelot.

On the way, the group is ambushed by a new ordeal of Demons. During the fight, Matrona cuts a Copper Demon's arm with a stone blade, kills a Red and Gray Demon with a rain of rocks and then impales a lot of demons with her Daichi no Kiba. However, her technique is surpassed by the Copper Demon and Matrona receives good damage to the energy breath of the demon, but then is saved by Elaine. Matrona is saddened by the rest when Elaine dies in Ban's arms, surprising herself when he sacrifices his immortality to resuscitate her.

When the demon army retreats from Britannia after the defeat of the Demon King, Matrona and the other survivors see themselves in front of the end of the Holy War.

That night, Matrona along Gerheade and Puora comes to Liones after being invited to the celebration. There, Diane gives Matrona her magic medicine so which Matrona assumes a human size. In the streets, the three meet with Jericho and Guila.

Matrona then attends the celebration in the new Boar Hat. There, she is seen winning a drinking competition with another man.

Matrona is seen along other fairies watching from the Fairy King's Forest as the Demon King stands with a new, gigantic and monstrous vessel created from the same land of Britannia. Frightened, Matrona asks Elaine if they are gonna die.

As a member of the Giant Clan and its warrior chief, Matrona is considered very powerful, having been considered a master of both their fighting style and their clan's Creation ability. She has also been shown to be a talented dancer, even with the loss of her right leg, and has even learned how to perform Drole's Dance. In her prime, she was an incredible warrior and even a talented teacher, having personally trained Diane and Dolores in the use of their abilities, and years later even taught Diane how to perform Drole's Dance as well. It is currently unknown if she is capable of increasing her power as she performs Drole's Dance, as both Diane and Drole himself are capable of doing. However, it can be assumed that the loss of her right leg is one of the reasons for this. She has also been shown to have an immense amount of physical strength, being capable of hurting Diane, with her bare hands, when the latter was using heavy metal. She has an incredible amount of endurance, as she was able to kill 330 Holy Knights of Liones in an instant, whilst suffering from poison and with one of her legs severely damaged.

Losing her right leg had apparently no effect on her mobility or even her fighting ability, as her power level was compared to a commandment's by Merlin, making her exceptionally strong. She was also capable of ambushing Galand and Monspeet, in order to save Diane.

Retrieved from "https://nanatsu-no-taizai.fandom.com/wiki/Matrona?oldid=150337"
Community content is available under CC-BY-SA unless otherwise noted.