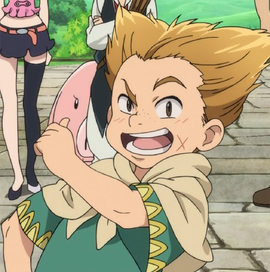 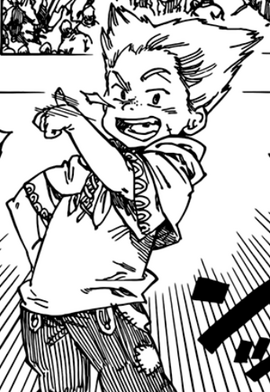 Mead「ミード」 is an orphan, adopted by the villagers of Bernia after his parents, who were travelers, became victim to an epidemic when they stopped by Bernia.

Mead is a short and young boy with hair that is skipped out in two (like a broom). Mead has a scar under his left cheek.

Mead is mischievous, but has great pride in his village and the Bernia ale, becoming very angry when Gilthunder insulted the ale. Since he was an orphan, and was jealous of the other children who had parents, Mead lied and pulled pranks to get the attention of people.

Some years ago, Mead's parents passed through Bernia, but fell victim to an epidemic which caused their death. Although he was raised by the villagers in his parents' place, he, being jealous of the other children who had their own family, lied and pulled pranks to get the villagers' attention.[1]

A day before Meliodas, Hawk and Elizabeth came to Bernia, the Holy Knight, Gilthunder, had come to Bernia and drank the Bernia Ale. Even though it was the best Bernia had ever made, the Holy Knight insulted it and called it "only slightly better than a horse's urine". This angered Mead, who put a bug in the Holy Knight's next drink, angering Gilthunder, who sealed Bernia's river's underground water source with a sword imbued with magic. That prevented the villagers from making the ale[2] and the grout to be grown, which are the sole economic incomes for the whole village[3], resulting in them blaming Mead for their crisis.[4]

The next day, the day Meliodas and the two arrived, Mead boasted that he knew someone from the Seven Deadly Sins, who could easily remove the Holy Knight's sword, and that the villagers need not worry. However, that lie annoyed the villagers even further, and some children even started throwing stones at him, saying that the village's current crisis was his fault. The rocks were stopped by Meliodas, and the Deadly Sin quickly took him to the Boar Hat. There, Mead was offered food, but since Mead did not have any money, Meliodas questions him about his friend, whom Mead claimed to be one of the Seven Deadly Sins, in return.[5]

Just after Mead tastes and throws up Meliodas' disgusting food, Elizabeth and Hawk enter the bar, with Elizabeth mentioning she heard that the young boy was a big prankster from the village head. After she tells that she also did the same as a child for trying to get her father's attention and tells a story of her past. Mead then tells his history and the reason he put an insect into Gilthunder's drink. He also admits his lie about knowing someone Seven Deadly Sins, and says that if the seven are enemies of the "evil" Holy Knights, they should be the "good guys".[6]

Just then, through the window, Mead sees the knights telling the villagers that if they do not pull out the sword by sunset, their taxes will be raised by ten times. Seeing how everyone was trying their best to pull the sword out, Mead also ran there and joined them; however, their attempt failed. Seeing all the villagers collapsed from exhaustion, Meliodas pulls out the sword with ease, leading Mead to speculate that he was from the Seven Deadly Sins. Meliodas, however, avoids giving a proper answer and says that he is the real owner of the Boar Hat. The villagers then apologize to Mead, with him running to them while crying with happiness.[7]

Since Mead was brought up by the villagers in Bernia, it can be assumed that he helps them in brewing Bernia ale.

Mead was taken in and raised by the villagers in the place of his parents after their death. However, due to the fact that he did not have a family, he felt jealousy towards other children who did, telling lies and pulling pranks to get the villagers' attention.[8] Though the villagers were angered by Mead's causing Gilthunder to seal the water source, and acted hostilely[9], they eventually apologize[10] after the village head scolds them for doing so[11], with Mead then running to them while crying with happiness.[12]

Retrieved from "https://nanatsu-no-taizai.fandom.com/wiki/Mead?oldid=151208"
Community content is available under CC-BY-SA unless otherwise noted.