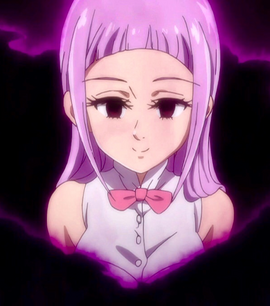 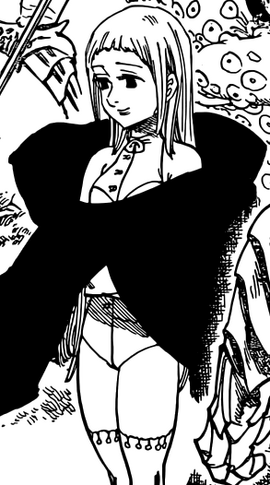 Melascula「メラスキュラ」 is an elite warrior of the Demon Clan, serving directly under the Demon King as the Faith of the Ten Commandments.[2]

Melascula is a young woman with long, pink hair. She wears a sleeveless white leotard with horizontal and vertical lines in the middle and on top her breast. She also wears a pink bow on the choker. She wears long, pink stockings with white ornaments going around each stocking at the thigh. She is constantly cloaked in a shroud of her own darkness. Though not readily apparent, she also has an abnormally long tongue accompanied by the enlargement of her mouth.

Her original form is a short and thin white snake with red eyes and a line of purple dots along her body[3]. After bathing in miasma from the Demon Realm for 300 years, she grew into a giant white hooded snake with purple stripes and red eyes[4], which she can transform into at will.[5]

Melascula has a calm, reserved, yet mocking personality. Upon being released from the seal she wishes to rest before acting and when the Ten Commandments realize that they may reclaim their lost magical power by consuming the souls of humans, she chooses to summon some lesser demons instead of having to work herself. Melascula also expresses boredom and sarcasm when faced with challenges, showing off her rather apathetic side. She is known to be boastful and cocky during battle. She also seems to look down on humans in general.

Melascula was originally a small poisonous snake that lived for 300 years bathing in miasma from the Demon Realm. Thanks to this miasma, she grew into a giant hooded snake, being able to take on a human form as well. At some point, she was chosen as the Faith of the Ten Commandments by the Demon King himself.

After Ludociel imprisoned a horde of demons as bait, the Ten Commandments Melascula, Monspeet, Derieri and Galand, along with Fraudrin, led an army of demons to the Fairy King's Forest.[6] They were confronted by Elizabeth, who wanted to stop the fighting between the Goddess and Demon Clan. While she talked with the demons, Ludociel revealed the giant Ark holding the captured demons. Melascula noted that most of them are civilians before Ludociel killed the prisoners. Angered, the demons attacked.[7]

The Archangels Sariel and Tarmiel destroyed most of the army with an Omega Ark but the Ten Commandments survived.[8] While the others fought the Archangels, Melascula flew to the Light of Grace where Gowther had taken control of Nerobasta.[9]After reporting the situation, annoyed that Gowther read her thoughts, Melascula is taken by the manipulated Nerobasta to the gate to the Celestial Realm.

Melascula corrupted the gate to the Celestial Realm, preparing it to connect to the Demon Realm instead.[10] However, Gowther tricked her into connecting it to the Demon Realm's prison, freeing the real Gowther. Furious at being manipulated, Melascula's head is grabbed by the real Gowther and immobilized her with his magic.[11] Melascula recriminates that he dared to leave his prison without the consent of the Demon King, leading Gowther to reveal that he has no interest in the Holy War. Later forces her to open a portal to be reunited with the doll Gowther.

Later Melascula rejoices when Zeldris arrives to go after the magician Gowther.

Along with the rest of the Demon Clan, Melascula was sealed away by the Goddess Clan after losing the Ancient War against the Four Races (Human, Fairy, Giant, and Goddess Clans).

As a member of the Ten Commandments, Melascula is exceptionally powerful. Like all members of the Demon Clan, she is able to utilize the mysterious jet-black matter as shown forming wings for flight. she uses it to battle in close-combat as seen in her battle against Ban. She can also use it envelop herself as a protective barrier of sorts and wrap it around her self to shield from strong attacks such as Ban's Fox Hunt technique. Her aura, combined with the other Ten Commandments is so powerful that it made the normally calm Hendrickson sweat in fear by their mere presence and unnerved Meliodas when he sensed it several kilometers away.

As stated by herself, Melascula is an expert at manipulating the dying and the dead, along with their souls. She has strong summoning capabilities, having brought forth lesser demons.

As Melascula was a snake that bathed in the miasma of the Demon World to gain her demonic powers, she can transform at will into her original giant hooded snake form, which possesses great strength and endurance as she managed to easily hold down Ban with her mouth alone and endured attacks from the other members of the Seven Deadly Sins.[12]

Melascula was bestowed the Commandment of Faith「 Shinkō」 by the Demon King, meaning that any who show faithlessness in her presence will have their eyes set ablaze.[18]

She is often near him and seems to respect him a great deal. During the time they were recovering their magic power, she talked to him a lot and without any type of formality despite him being the leader. This proves their friendship and respect they have for each other. When Galand wants to slack off and drink she berates him, stating that Zeldris would be furious.

Though they have their disagreements, they are actually very good friends who enjoy each other's company and drinking together. She says she teamed up with him in order to look after him because she cares for him, and after Galand is turned to stone by his own curse against Escanor, she is noticeably distraught. During the great Holy War, Galand protected her without a thought showing he genuinely cares for her as a friend.She calls him "Old Man"

Melascula and Estarossa are fellow Commandments as they both have been part of the Ten Commandments since 3,000 years ago. They seem to have a normal relationship and get along fine. However, when Melascula attempted to eat Meliodas' soul, Estarossa was angry and planned to kill her for it. He tells Ban after breaking her neck that if Ban did not do anything to her, he would have.

Meliodas was the former leader of the Commandments and she looked up to him greatly just as the others did, to the point of considering him the only demon suitable to become the next King. However, after he betrayed them, Melascula turned that admiration to disgust, seeing him as worthless and useless. Melascula has tried to kill him twice personally due to her hate against him as a form of revenge for what Ban and Escanor did to her. She also trapped him in the cocoon of darkness.

Melascula, at first, had no interest in Ban other than his soul due to a desire for regaining her lost power. She found his and Elaine's predicament funny, and attempted to eat his soul in front of both Elaine and Jericho in order to scare them. After Ban's adoptive father sacrifices himself to protect Ban, the fox sin began to hate her more due to her being the cause of both his and Elaine's suffering. Ban later destroys six of her seven hearts, making their relationship mutually antagonistic with Melascula changing into her snake form to devour him first.

Melascula at first had no interest in Escanor and only thought of him as a weak human who made good liquor. After he revealed his daytime form and made Galand turn himself into stone, she thought of him as a cocky and arrogant man which only made her want to kill him faster. After Melascula ate Escanor's soul, the intense heat burnt her to a crisp, leaving her charred and black. From then on, she began to fear his power and also wanted revenge on him, making their relationship mutually antagonistic.

Retrieved from "https://nanatsu-no-taizai.fandom.com/wiki/Melascula?oldid=154702"
Community content is available under CC-BY-SA unless otherwise noted.