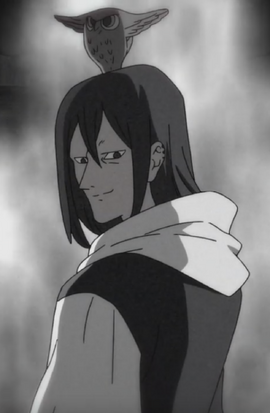 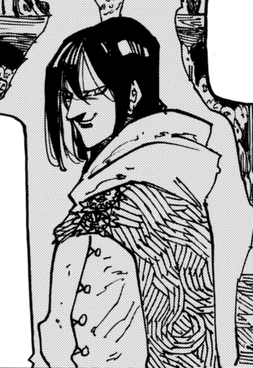 Merlin's Father is an elder sage and chief of Belialuin, the capital of the wizards.

Merlin's Father has a young appearance with defined features similarly like his daughter if she were a man, he wears a wizard's robe, has long dark hair and three piercings in his left earlobe.

After returning from Purgatory his appearance was reduced to that of an invalid, looking old and sickly.

Despite being the father of Merlin, he had shown not even a sign of parental love for his daughter at all and only sees her as a tool he raised.

He often sports a smug smirk as arrogance of his great magical abilities as the chief of Belialuin and also an aloof face whenever he is around Merlin.

He was the chief sage of Belialuin, and he was who, along with the wizard Gowther, taught his daughter Merlin about magic. He and the other wisemen put Merlin along other children with aptitude for magic under experiments to turn them into weapons against higher ranking goddesses and demons. Deep down, Merlin was a child hungry for the love of a parent. However, her father never gave anything to her other than study material and tests to carry out.

While Merlin was still a small child her father discovered a way to travel to Purgatory, a dimension that exists between the living world and the afterlife. After a single minute in this dimension Merlin's father returned back looking as an old, invalid person. Bedridden, he explained how Purgatory is a place of chaos where mutilated souls and predatory monsters seek prey, how there's scorching heat, blistering cold and toxic air that destroys the flesh of the living and how time and space are warped, saying that a minute corresponds to a year in there.[1]

Merlin's father clearly has incredible magical power and knowledge as he was the chief of the capital of the wizards and discovered a way into Purgatory and was capable of surviving in it for a year and returning, although spending so much time greatly weakened him, turning him into an old, invalid person.

He also has the capacity of a "sixth sense" as he stated he relied on it while in Purgatory as perception is lost in there.[2]

Given the nature of observation subjects in both, the relationship with his daughter Merlin was very distant. There's not a speck of father-daughter love between them. In her childhood Merlin wanted her father to love her, but he only cared about developing her capacity for magic.

Retrieved from "https://nanatsu-no-taizai.fandom.com/wiki/Merlin%27s_Father?oldid=150341"
Community content is available under CC-BY-SA unless otherwise noted.