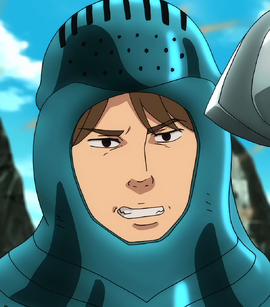 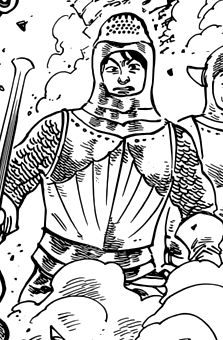 Muramo「ムラモ」 is a New Generation Holy Knight and he was the first victim to be forcibly transformed into a Demon mutant by Hendrickson.

Muramo wears a set of full-body armor with a helmet exposing his face. He has brown hair and black eyes that were the result of drinking the Demon blood and survived.

Muramo is a very serious and hot headed man, as he was quickly draw to anger and willingly to fight Hendrickson, despite not knowing who he was or what he was capable of.

Muramo along with a unknown Holy Knight, encounter Hendrickson who easily destroyed the Liones Castle, nearly killing all Holy Knights and Seven Deadly Sins inside and Muramo was willingly to fight him. However, his partner calm him down and try to speak with Hendrickson until the latter used Blood Awaken which awaken the New Generation demon blood that transformed them into hybrid Demons, including Muramo who ate his partner.

Later Muramo climbed to the top of the ruined tower and attempted to attack the Sins and the Holy Knights but was pushed back by Guila's Explosion. When Ban and King began to root out every single demon plant within the New Generation throughout the capital, Muramo was presumed to have been reverted back to normal and lost his powers.

As a Holy Knight, Muramo's combat capabilities must be far above the level of an average human. However, due to the demon blood he drank and survived the ingestion, it is possible that Muramo is much stronger than a lower-ranked Holy Knight.

After being reverted back to normal, Muramo lost all of his powers.

Muramo possesses a double-edged sword that he uses in battle.

Retrieved from "https://nanatsu-no-taizai.fandom.com/wiki/Muramo?oldid=150344"
Community content is available under CC-BY-SA unless otherwise noted.