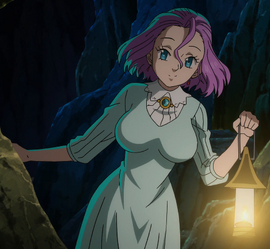 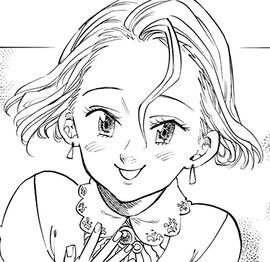 Nadja Liones「ナージャ・リオネス」 was a princess of the Kingdom of Liones, daughter to the tenth king and the older sister of Bartra and Denzel Liones.[3]

Nadja is a young girl with short purple hair that stops above her shoulders. She wears a full length dress with long sleeves and a decorative collar with a brooch and earrings.

Her appearance is almost identical to that of her niece, Veronica.

Nadja is a kind girl who loves to read, her favorite books being adventure stories. This could be because of her frail body that stops her from going outside the castle walls. She is also very caring and accepting, this is shown when she brings Gowther a present. She also still accepts him and cares for him, even after finding out he is a doll.[4]

Nadja is the sister of Bartra and Denzel Liones and the princess of the kingdom of Liones.

She met Gowther after hearing one of her brother's visions about a person in a cavern underneath the castle. She went and explored herself, coming across Gowther who seemed to be waking up from a long sleep. She screamed in surprise when she first saw him due to being surprised by him appearing in front of her, though calmed down and began asking him questions and telling him where he was.

When she headed back to the castle she promised Gowther that she would return, comparing his excitement to that of a child's. She excitedly told Bartra about Gowther when she returned to the castle. Despite being happy for his sister, Bartra was worried about her due to her heart condition.

The next time Nadja went to visit Gowther, she brought her favorite stories, telling him that she spent a lot of time reading due to her poor health. She was surprised when Gowther told her that he had finished the book after skimming the pages quickly and was further shocked when Gothwer showed his shape shifting abilities by demonstrating the heroine's long hair and how he was confused by how she could fight with the helmet getting in the way of her hair. She passed out when Gowther revealed himself to be a doll and showed her his heart. Gowther brought her back to the castle, and, refusing to be alone, dressed like a maid to be brought into the castle after Bartra provided him such clothes. Nadja was annoyed by the outfit and told Bartra not to convince Gowther to cross dress.

Nadja and Gowther began having a close relationship, always being together, a fact that the guards and her family noticed. Bartra pulled Gowther to the side and told him to stay with his older sister, to which the doll agreed.

At some point a bedridden Nadja was alone with Gowther in her room. The princess began to open her heart to Gowther and express her feelings, to which the doll reciprocated. Getting more intimate, they took off their clothes and made love.

Then Nadja quietly passed away with a peaceful smile in her face, as her dream was to spend her final moments with Gowther.

After finding that she died in her sleep, Gowther got desperate and screamed. As a last resort, he tried to bring back Nadja by ripping out his own heart and replace the princess' one, but it did not work, leaving Gowther devastated.

The guards alerted by Gowther's shout enter the room. Seeing a bloodied Gowther on top of Nadja's body, the guards mistakenly considered that Gowther had killed her, thus leading to his arrest and eventually sentenced to death by immolation.

Retrieved from "https://nanatsu-no-taizai.fandom.com/wiki/Nadja_Liones?oldid=152134"
Community content is available under CC-BY-SA unless otherwise noted.