Nakaba Suzuki (鈴木央, Suzuki Nakaba), born February 8, 1977 in Sukagawa, Fukushima, Japan is a Japanese mangaka, and the author of Nanatsu no Taizai. He works without assistants, with his wife helping him on some occasions. In his career, he has published series in the four major magazines: Shueisha's Weekly Shōnen Jump, Shogakukan's Weekly Shōnen Sunday, Kodansha's Weekly Shōnen Magazine and Akita Shoten's Weekly Shōnen Champion.

He made his debut in 1994 with a oneshot called Revenge, for which he received a honorable mention award, Hop☆Step (ホップ☆ステップ). In 1996 he published another oneshot sequel to Revenge in Weekly Shonen Jump Issue 46, called Savage. His next oneshot was published in Akamaru Jump 1998 Winter Issue, called Taiyō no Omo (太陽の主), which was also later collected in Rising Impact second volume.

His first series, where named Rising Impact in Weekly Shonen Jump from 1998-52 to 2002-12 Issue, spanning total 17 volumes. The series was discontinued in 1999, but after requests from the readers, was resumed in 2002, when it again ended. The series tells a story about a boy named Gawain, who lives in mountain area and loves baseball, but gets interested in golf.

His next series Boku to Kimi no Aida Ni (僕と君の間に) started in Ultra Jump in 2004, and continuing until 2006 and spanned 3 volumes. While the series was being published, he published a oneshot called Memory of Moon in Weekly Young Jump's 2004-14-15 Issue. Later in the same year, he published another oneshot in IKKI March Issue, named Go! Breakthrough!! (ゴー!ブレイクスルー!!). In addition to that, he published another oneshot in the same year, called Blizzard Axel (ブリザードアクセル), which was published in Weekly Shonen Sunday's 2004-28 Issue.

The last oneshot was turned into a series in 2005, while he was still working on Boku to Kimi no Aida Ni. The Blizzard Axel series ran from the 2005-15 Issue to the 2007-27 Issue of Weekly Shonen Sunday, spanning 11 volumes and telling the story about a boy who becomes interested in skating.

His next work, Kongou Banchou (金剛番長), started being serialized in the 2007-47 Issue of Weekly Shonen Sunday, and ended in the 2010-15 Issue, spanning 12 volumes. It told the story of a "banchou", who saves Japan from destruction. In the January and February's Ultra Jump Issues of 2010, he released a two-part oneshot called Mayoe Kohitsuji-tachi! (迷え子羊たち!). Another oneshot called Cowgirl tai Soratobu Enban (カウガール対空飛ぶ円盤) was published the same year in the Sunday GX 2010 October Issue.

In 2011, he released a two-part one shot called Chiguhagu Lovers (ちぐはぐラバーズ), which was published in the 2011-20 and 2011-21 issues of Weekly Shonen Champion. Chiguhagu Lovers was then turned into a short series in the same magazine, running from 2012-15 to 2012-30 and spanning 2 volumes, and it told the story of two childhood friends from a kendo dojo.

Soon after Chiguhagu Lovers ended, he published a oneshot called Nanatsu no Taizai (七つの大罪) in the 2011-52 Issue of Weekly Shonen Magazine. The oneshot was then subsequently turned into a series of the same name in the same magazine in 2012, and began its serialization in the 2012-45 Issue. 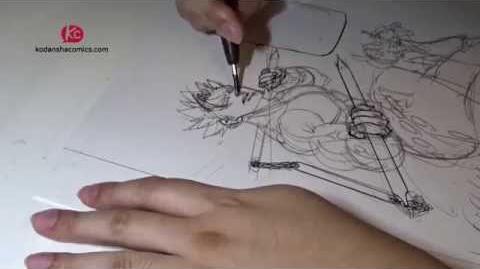 Nakaba Suzuki drawing The Seven Deadly Sins
Add a photo to this gallery
Retrieved from "https://nanatsu-no-taizai.fandom.com/wiki/Nakaba_Suzuki?oldid=143002"
Community content is available under CC-BY-SA unless otherwise noted.