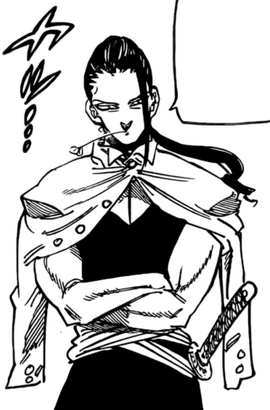 Nanashi「ななし Nanashi」 is a foreign swordsman who joined the Great Fight Festival for an unknown purpose.

Nanashi has long, dark hair and eyes, with the former being kept in a simple ponytail that has a small section fall at the left side of his face. On the back, Nanashi has four scars from where his wings were before losing them.[2] He wears a light, slightly wrinkled kosode with forearm-length sleeves, a patterned obi sash around his waist and a pair of dark hakama. At the left side of his waist is his katana tucked into the obi. He is also seen chewing on what appears to be a twig.[3]

Little is known about Nanashi's personality. However, he is shown thus far to be a quiet man[4] who seeks great challenges.[5] He has shown remorse for not being able to save all of the people of Camelot following the kingdom's destruction and when he is revealed as a Goddess to Orlondi, he simply says it's "an old story" that no longer matters.

Nanashi came from an eastern country who drifted to Britannia.[6] After accepting the invitation to participate in the Great Fight Festival at Vaizel perpetrated by Gloxinia and Drole of the Ten Commandments, Nanashi entered the labyrinth where he encountered an Earth Crawler and killed it with relative ease, saving some few groups of knights who took notice of his attire foreign to them in Britannia.

Upon being asked by one of them of his identity, Nanashi simply answered that the challenge lies awaited for him before proceeding on the depths of the maze where he finally reached the finish line and met up with the rest of the several contestants who also arrived including the Seven Deadly Sins themselves.

When Drole and Gloxinia start the festival and divide everyone in pairs, Nanashi is paired with Arthur. The young king presents himself kindly saying that he is happy to be his companion. After Drole and Gloxinia were attacked by Escanor and Meliodas, Nanashi is taken hostage by Drole along with all the other participants, until Gilfrost manages to teleport everyone to Liones.

One month after the events in Vaizel, the Demon Clan began its conquest of Britannia. Nanashi helps Arthur in his attempt to regain control of Camelot, which had been taken as headquarters by the demons. He, along with Arthur and other knights face a horde of Gray Demons. Nanashi eliminates several of them and together with Arthur manage to defeat them all. Upon hearing Cath speak, Nanashi seems to sense something in him, claiming that Arthur will not die while Cath was with him.

When a troop of Blue Demons appears to attack them, the group is forced to undertake the withdrawal.

After a failed attempt to free Camelot, Nanashi helps Arthur to hide all the surviving civilians in an underground hiding. When Arthur come along with Orlondi, Nanashi informs him of his recognition that fifty five demons were already released from the seal. Arthur reveals that he has already eliminated half of them, gaining the praise of Nanashi for the growth he has had in recent months. There, Nanashi says that it is time to carry out his plan to infiltrate into the castle himself to recover the holy sword, Excalibur.

In the ruins of Camelot following Cath's defeat, Orlondi is able to break out of the underground bunker and is shocked to see what remains of Camelot before Nanashi calls for his help in getting the civilians outside. The two of them lay the unconscious people onto the ground where Orlondi commends him as the people would've died if not for him.

Nanashi, however, blames himself for not being able to save everyone as he looks to the few people who were killed in the attack but Orlondi tells him he shouldn't blame himself for that but is surprised to see four scars on his back and realizes that Nanashi is from the Goddess Clan, his wings having been torn off for reasons unknown.

He claims it to be an old story and now is nothing more than a wandering samurai without a master but notices something in the distance and the two of them are surprised to see none other than Merlin and Arthur flying to them as Orlondi goes to greet them, while Nanashi watches with a smile.

Nanashi is a very powerful combatant, displaying superhuman levels of speed, strength, and precision when he easily defeats an Earth Crawler and a Gray Demon by his lonesome with nothing but a normal blade.[7] He is an extremely skilled swordsman, bisecting an Earth Crawler with ease despite the protective mucus on its skin.[8]

Nanashi had an odd friendship with King Arthur, the young ruler of Camelot whom he had met as his partner at the Great Fight Festival in Vaizel. While being indifferent to him despite the latter's attempts to befriend him, Nanashi tags along with Arthur to help defend Britannia from the Ten Commandments' onslaught, presumably to seek a much greater challenge from fighting the Demons.

Retrieved from "https://nanatsu-no-taizai.fandom.com/wiki/Nanashi?oldid=151785"
Community content is available under CC-BY-SA unless otherwise noted.