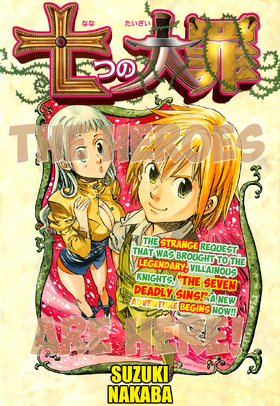 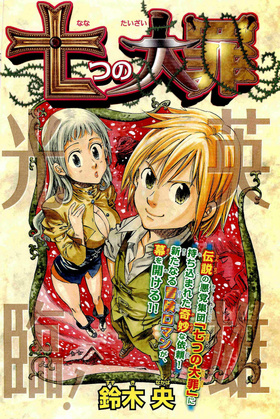 The story takes place in a snowy mountain at a local bar where a mysterious owner with the appearance of a kid, Meliodas, meets the princess of the kingdom, Elizabeth. Meliodas saves her from a group of knights and defeats a Holy Knight, before leaving on a journey to search for the rest of the Seven Deadly Sins with Elizabeth.

At the Avallo, Meliodas was pleasantly serving food to his customers, when a mysterious figure enters the bar wrapped in an extremely long scarf. Meliodas grows agitated, and people begin wondering whether it was a ghost of the Seven Deadly Sins. The figure accidentally trips over, unraveling the scarf and revealing herself to be a unkempt young girl. She abruptly announces that she is looking for the Seven Deadly Sins, leaving everyone around her in shock, but Meliodas only concerns himself with the broken properties caused by Elizabeth. After hearing Elizabeth's declaration, a group of knights appear and threaten to baptize (torture) her. However, she ignorantly replies that she hates Holy Knights, angering the knights who begin drawing their swords. Meliodas interferes with the argument and triggers a trap which sends the knight out of the bar.

Having ended all the commotion, Meliodas begins questioning Elizabeth about her aims, but she soon falls asleep after eating, so Meliodas reluctantly carries her to a bed to sleep.

Meanwhile, the Holy Knight Alioni abuses his powers and forcefully chooses a young girl as her companion for the evening. The girl's brother begs him to let his sister free, only to be killed by a single slash. Alioni proceeds to question the group of knights the definition of a Holy Knight, and states that they have embarrassed him. Back at Avallo, Elizabeth awakes and takes bath as requested by Meliodas. He starts asking Elizabeth why she was searching for the Seven Deadly Sins, to which she replies saying that she desires to save the kingdom from the tyranny of the Holy Knights. She believes that the Seven Deadly Sins are the only people whom she can rely on, and Meliodas asks her to show the strength of her resolution. Without thinking, Elizabeth draws a dagger and prepares to stab herself, but before she was able to, Meliodas blocks it with his hand.

Suddenly, the wall of the bar is smashed opened by Alioni, who announces Elizabeth to be a wanted fugitive and former princess. She demands the Holy Knight to free her father, but instead, Alioni commands half a dozen of knights to kill them. Swiftly, Meliodas sends the knights flying away consecutively with his bare fist. The Holy Knight angrily whips his sword out and destroys all of the furniture as Meliodas continue to express the duties of a prideful knight. In the midst of the turmoil, Elizabeth notices the Dragon symbol of Wrath on Meliodas' arm, who then reveals a gigantic sword from the ground, astonishing everyone. He declares himself to be the captain of the Seven Deadly Sins, immediately agitating Alioni, who quickly randomly swings his sword at Meliodas. The Deadly Sin easily parries the attacks and thrust his blade, sending Alioni flying far away. Meliodas finally decides to help Elizabeth on her journey to begin finding the rest of the Seven Deadly Sins and save the kingdom.

The Last Page of the Oneshot.

Cover of Nanatsu no Short Stories.
Add a photo to this gallery

Retrieved from "https://nanatsu-no-taizai.fandom.com/wiki/Nanatsu_no_Taizai_(Oneshot)?oldid=82772"
Community content is available under CC-BY-SA unless otherwise noted.