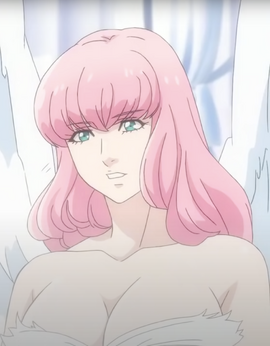 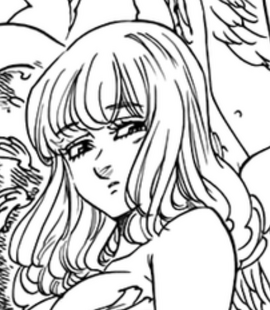 Nerobasta「ネロバスタ」 is a member of the Goddess Clan who dwells within the blade of Denzel Liones as his secret weapon against the Demon Clan. In the past 3,000 years ago, she was an aide of Ludociel of the Four Archangels.

Nerobasta is a voluptuous woman with pink hair, large breasts and angelic wings. She is clothed in a light blue, figure-hugging dress and wears a pair of large gauntlets over her hands.[1] When she first manifests from within Denzel's sword, she appears to be as large as a giant, but her true size of her physical body is closer to that of a human.

During her possession of Denzel, Nerobasta shows a strong hatred for the Demon Clan, not caring for humanity, showing no empathy for Denzel's sacrifice to summon her and blamed the humans for breaking the seals on the Demons. Nerobasta is shown to be rather cowardly in nature, as after her attacks didn't affect Derieri she begged the demon to spare her life. She even started to direct Derieri's anger towards her superiors as she was ordered to kill the demon women and children hostages despite the fact that she holds some of the fault for doing it anyway.

She is also prideful and somewhat condescending as she demanded the humans who entered Stigma's base to kneel in reverence before the presence of her superior, Ludociel. Overall Nerobasta is a selfish individual and cares only for herself and her reputation. This is shown as during Melascula and Gowther's infiltration of Stigma's headquarters, she called all the members of Stigma to kill them while disregarding the potential risk to themselves. During the humans' elimination of Stigma when none of the races entered the Light of Grace, Nerobasta became more concerned with her own standing in the Goddess Clan and Ludociel's view rather than if the Stigma members were alright or not.

During the Holy War, Nerobasta was a Divine Lance Corporal of Stigma and a faithful subordinate of the Archangel Ludociel. She was part of the massacre of innocent demon civilians by her superiors' orders, which earned Derieri's justifiable hatred for the Goddesses due to losing her own sister in said massacre. She was present at the confrontation between Elizabeth and Ludociel about their opposing views about the eradication of the Demon Clan.

When the Four Archangels and later Ludociel join the battle against the Ten Commandments, Nerobasta remains in the Light of Grace under orders to protect the gate to the Celestial Realm. However, Gowther manages to infiltrate and uses his Invasion to put Nerobasta under his control and force her to take him and Melascula to the gate to turn it into a gate to the Demon Realm. After being released from the power of Gowther, Nerobasta observes with horror what happens before her. Knowing that neither Gowther nor Melascula are active fighters, Nerobasta calls the other members of Stigma to come and help her. However, no one comes because everyone begins to be killed by Rou and his companions.

At some point, along with the rest of the Goddess Clan, Nerobasta lost her physical body in order to seal the Demon Clan and was sealed within the sword that is held in possession of Denzel ever since as a secret weapon against the Demon Clan if they ever return eventually.

While coming to Fraudrin's aid at the Pleiades' research tower, Grayroad notes she feels something "foul" coming from Denzel.[2] Nerobasta's face can later be seen reflected in the blade of Denzel's sword.[3]

As a last ditch effort to stop the Ten Commandments, Denzel summons Nerobasta by offering his body to be Nerobasta's vessel which she inhabited.[4] As she realizes the return of the Demon Clan, she falsely accuses the human clan of releasing the seal provided by the Goddess Clan and refuses to fight and flies upwards, annihilating two demons on her way. She is then confronted by Derieri, whom Nerobasta recognizes as the Purity of the Ten Commandments. Confident in her abilities, Nerobasta uses Ark on her opponent, but in the end is no threat to the demon. There, Nerobasta tries to reason with Derieri affirming that the massacre and treason committed by the Goddesses in the past were orders from superiors that they were forced to obey, but Derieri defeats and kill her with only one slice of her hand, surrounded with darkness.

Nerobasta has shown to be a powerful goddess, able to kill two lesser demons with ease, but her power is still under that of a Ten Commandments level like Derieri, who resisted her attacks and killed her effortlessly. Like all members of the Goddess Clan, she has a pair of wings that grants her the ability of flight.

Using Denzel's body as her vessel, Nerobasta wielded his weapon in battle.

Even though he wasn't acting with her differently than with his allies, Nerobasta has shown some feelings for Ludociel, it is also hinted that he may be well aware of her feelings about him, but remaining ignorant about them and wait the end of the Holy War to return them to him.[6]

Retrieved from "https://nanatsu-no-taizai.fandom.com/wiki/Nerobasta?oldid=150346"
Community content is available under CC-BY-SA unless otherwise noted.