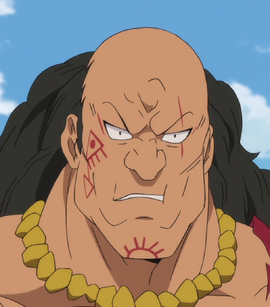 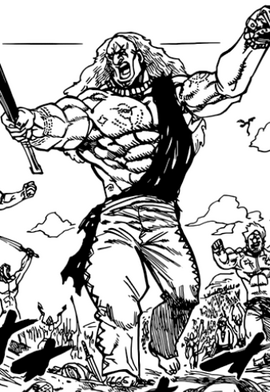 The Chief is an huge, and very muscular man with long puffy hair and a scar across his left eye. His upper body is left uncovered, save for a single piece of cloth draped over the left side of his body. Symbols formed with dots were pierced into his skin throughout his body.

He seems to be a very violent man, who is also fairly arrogant, as shown when he assumes all the knights of Britannia to be as weak as the knights he had just killed. He is cruel and heartless as indicated through how he treats his enemies without any pity or sympathy.

The chief led his large army of subordinates as they invaded Liones and brutally massacred numerous knights of the kingdom. Assuming that all the knights, including the Holy Knights to be equal in strength to the knights he massacred, he ordered his subordinates to plunder the entire kingdom. A flying dragon then suddenly appeared in the sky, with two Holy Knights, Gilthunder and Howzer, jumping down from it with a small lighting strike. Underestimating their strength and thinking that the duo would easily be killed by his army of three thousand, he, along with his entire army is quickly and easily destroyed by the duo.[2]

The chief, being huge in size, had great physical strength and possessed much more power than an ordinary knight of Britannia, but is easily defeated by a Holy Knight.[3]

Retrieved from "https://nanatsu-no-taizai.fandom.com/wiki/Northern_Barbarian_Chief?oldid=137065"
Community content is available under CC-BY-SA unless otherwise noted.