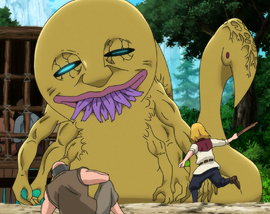 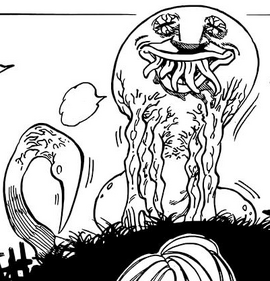 Ochre Demons (alternatively called Ochre「 Ōkā」) are a family within the Demon Clan.

As the name suggests, they are Ochre in color. They look rather serpentine in appearance while also sporting six arms and a stinger at the end of their tails. Their facial features include squinted blue eyes, purple lips, and multiple purple tongues.

A Ochre Demon is seen terrorizing Pelliot's village next to a Copper Demon. After listening to Pelliot's discussion with his father about his intention to get rid of the demons, the Ochre Demon puts the example beating the boy up in front of the entire village. Before he can kill him, Gowther appears and uses his Invasion to save Pelliot and force the Ochre Demon to hit and injure himself. The Ochre Demon still tries to attack one of the villagers, but Ban gets in the way. When Ban says that for some time he did not feel death, the Ochre Demon begins to attack him and tell him to die, which is taken by Ban as a masochistic punishment after realizing his bad way of acting. When the Demon says that it will take his soul to recover and revenge, Ban brutally kills him by crushing him with a stomp.

Various Ochre Demons are part of the Demon Clan army that is faced by the Holy Knights during the Holy War. One of them is killed by Arden's arrows.

An Ochre Demon punches Howzer during the second wave of the army, but is then eliminated by Elaine. Matrona kills an Ochre Demon with her Daichi no Kiba. An Ochre Demon tries along with several other demons to devour Elaine when she falls, but all are killed by Ban.

Retrieved from "https://nanatsu-no-taizai.fandom.com/wiki/Ochre_Demons?oldid=140471"
Community content is available under CC-BY-SA unless otherwise noted.