Ore Tree Orudora is an artificial tower constructed through the joint efforts of the Ten Commandments' Gloxinia and Drole.

Standing at a peak height of 1,000 feet and consisting of twenty stories, Orudora possesses the sturdiness and fire resistance of minerals as well as the regenerative abilities of a plant. Additionally, it is incredibly flexible and elastic, easily resisting and recovering from large amounts of structural deformation.

Its entrance can only be opened by Gloxinia or Drole, or by defeating either of the two.

After Gloxinia infiltrates the Fairy King's Forest, King and Diane are taken to Orudora where they engage in a scuffle with the two Commandments already present.

When Drole and Gloxinia arrives in the battle between the Seven Deadly Sins and Chandler, the two uses Orudora to trap Chandler inside. Despite that the Pacifier Demon manages to break free, this gives the Sins enough time to scape. 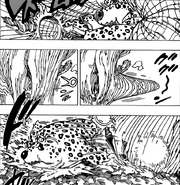 Orudora's walls absorbing and recovering from the damage inflicted