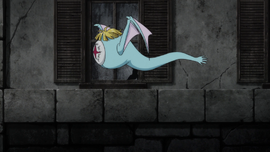 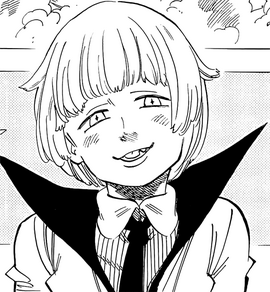 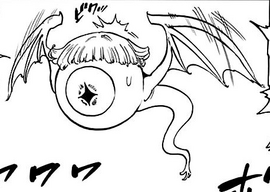 Royalty of the Vampire Clan

Orlondi「オルロンディ」 is a vampire and royal member of the Vampire Clan. He served the Vampire King twelve years ago, during the time their clan controlled the Kingdom of Edinburgh.

Orlondi as a flying eye
Orlondi resembles a small child but has a devil's tail, and is dressed in a regal attire.

After Merlin took his remains, she turned him into a small flying light blue creature with a single eye with little bat wings, while keeping his original hairstyle.

Like other members of the Vampire Clan, Orlondi adopts a sadistic personality, taking pleasure in sucking the blood of other people and killing them if their blood tastes disgusting to him. He's also willing to kill anyone who stands in his way or interferes with his blood sucking spree, even his fellow kin.

After taking over Edinburgh Castle and turning all of its population and Holy Knights into vampires or massacred them, Orlondi stood by along with his fellow members of the Vampire Clan and noticed the presence of Ban of the Seven Deadly Sins venturing alone into the castle.

Witnessing the Fox Sin of Greed easily kill off the Edinburgh Vampiric Holy Knights, Orlondi volunteers to deal with them and dragged the immortal into the castle just after the former finished off the last vampiric Holy Knight. After introducing himself, Orlondi makes several holes on Ban's armor and starts draining his blood to which the Vampire finds it so good. Orlondi then declares that Ban will become his personal blood bag forever, prompting Ban to begin struggling. Orlondi then reveals that he uses invisible venom-tipped tentacles protruding from his body to paralyze his victims.

Later, Orlondi expresses his joy of consuming Ban's blood. Ban also expresses his joy of tasting great wine, and starts drinking a bottle. Orlondi is confused and says that wine will ruin the taste of blood  but realizes that Ban is somehow able to move. Ban reveals that poison has no effect on him, and begins his counterattack. Orlondi then declares that he will kill Ban, but does not realize that he has become engorged from Ban's limitless supply of blood. He attempts to move, but cannot find the strength to do so, since he did not notice Ban was also stealing his strength while his blood was being drained. Ban ends the encounter with a single punch to Orlondi's stomach, and Orlondi explodes.

Orlondi survives the encounter with only one eyeball left. He begins to plot his revenge, but was taken in by Merlin for further testing.

Orlondi now turned into a flying eye in the service of Merlin, was sent to the Kingdom of Camelot to look for Arthur Pendragon, nevertheless all that it found was demons and the humans that served them. Eventually he met with Zeldris whom he recognized. Zeldris released a powerful attack against Orlondi without hurting him, however, the damage was received by Merlin.

After this, Orlondi remained hidden until it was found by Arthur and carried to the hiding place with the other survivors of Camelot. Orlondi tells Arthur that all humans controlled outside are being used as sacrifices to break the seal of the Goddess Clan and release the rest of the Demon Clan, Arthur tells him that since they are all having terrible moments, it is necessary to stay positive so as not to lose hope to what the citizens tell him that he is the only reason why they do not lose hope and that they are sure that he will manage to recover Camelot. When Orlondi tries to prevent him to go to the castle, Arthur claims that if necesary to recover Excalibur.

Like any Vampire, Orlondi has blood draining abilities and vampiric regeneration. Orlondi has shown the ability to use invisible pipes to draw out the blood of his opponents, these pipes have venom tips that paralyses his prey, allowing him to easily drain their blood.

Retrieved from "https://nanatsu-no-taizai.fandom.com/wiki/Orlondi?oldid=152583"
Community content is available under CC-BY-SA unless otherwise noted.