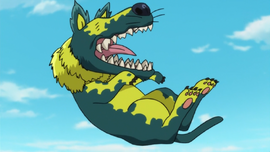 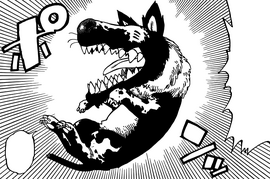 Oslo「オスロー」 is King's pet Black Hound, an insanely vicious wild creature that will hunt enemies until it successfully kills them. It is implied that Oslo is the reincarnation of Rou from 3000 years in the past.

Oslo is a dog-like creature with green fur, who is covered in scars, with his neck being the only area with white fur. Oslo has a fairly short tail, sharp and piercing teeth, and grows larger with it feels threatened, as all black hounds do. It shrinks into a small dog when not feeling threatened at all, with its scars not being visible in this form.

Oslo, just like all black hounds, is insanely violent and will not give up on his prey until it is successfully killed. However, Oslo appears to be quite submissive towards King, and acted like a normal puppy before them.

Oslo was born after Gloxinia joined the Ten Commandments, protecting Gerheade in the previous Fairy King's place. How Oslo met King and why he is submissive towards him has not been revealed yet, but it was revealed that Oslo knew King many years before he met the Seven Deadly Sins, in the Fairy Realm.

Oslo attack and defeats the Holy Knight apprentice Andre and his partner who were about to attack the Sins. Oslo was about to attack them but Ban threatens the beast. He grew larger due to his natural ability but Meliodas used his sword to create an illusion of a very huge, fearsome, ethereal dragon-like creature which scared Oslo who shrunk down and ran away. Oslo later returns back to King, his owner, and after King's first fight with Ban, King returned embarrassed because Diane was there and he said she was so cute and told Oslo what to do but King and Oslo saw the Sins and they were trying to find a way to the Capital of the Dead and then a bunch of flowers were going wild and they disappeared along with King.

King summons Oslo through a portal that the latter made and introduced it to Diane and reveals Oslo's ability to teleport and the fact he never brought him to Boar Hat was because Oslo loves pork. King order Oslo to teleport Diane to Liones. As Diane was being attacked by the Holy Knights, Oslo feels Gilthunder's Thunderbolt and ends up getting damaged. King worries about Oslo to see if he is all right, but manage to sent King to Liones to save Diane.

Oslo later appears in Liones while King was debating whether to ask Diane out on the festival or not due to her being possibly depressed over Meliodas and Elizabeth's relationship.

Alongside his master, Oslo and King meet with the revived Elaine and soon rejoin Meliodas in the Vaizel Great Fight Festival. Oslo is paired with Matrona. After Gloxinia and Drole were injured by Escanor, Oslo is teleported to Liones along with all the others by Gilfrost.

Oslo returns with King to Fairy King's Forest. After King passed the trial, he wakes him from fainting by licking his face. When Oslo sees Gloxinia embracing Gerheade, he immediately tries to attack him, but Gerheade stops him by telling him that he is not the enemy. When Gerheade tells her brother about Oslo, Gloxinia realizes that he is actually Rou's reincarnation, flooding him for his tenacity, only for Oslo to bite his head. Oslo finally opens a portal that transports King and Diane back to Liones.

Oslo appears in the middle of the battle in Heaven's Theater.  When the rays of light and darkness were about to hit Gowther, King, Hawk and Elizabeth, Oslo intercepts them with one of their portals. Oslo leaves the portal surprising King and Hawk. After assuming his giant form, Oslo transports Diane to the place through his mouth.

Oslo receives Mael's Jiai no Kougyoku with the others, ending seriously wounded.

When Mael was about to unleash his final blow on his incapacitated enemies, Oslo decides to sacrifice himself to save them. Growing up to its giant size, Oslo receives the second Jiai no Kougyoku fully. In his last moments, the soul of Oslo expresses Rou's desire to protect what Gerheade values most, which reaches the fairy's ears.

In the aftermath of the battle, Mael uses a technique on both the bodies of Derieri and Oslo that allows the soul to move forward to a new life while keeping their memories of their past life. Mael states that he did this because in case they were to be reincarnated and wanted to punish him, he would accept it.[1]

Oslo is very quick and powerful, which is seen when he quickly defeats two Holy Knight apprentices with ease. He also has the ability to change his size depending on how threatened he feels. He grew very huge when Ban released a lot of killing intent toward him, and was later seen to be as small as a small dog when not threatened at all. Like all Black Hounds, Oslo has the unique ability which allows it to send anything it swallows to a completely different location.

King is Oslo's master and is very loyal to him.

At first, Oslo sees Hawk as food and someone to mess around with, aka, eating his meals. However, after training with him at Istar and defeating a Tyrant Dragon by eating its inside, Oslo grows to respect Hawk, calling him big bro or captain, somewhat joining his Knights of Leftovers.

Retrieved from "https://nanatsu-no-taizai.fandom.com/wiki/Oslo?oldid=145731"
Community content is available under CC-BY-SA unless otherwise noted.