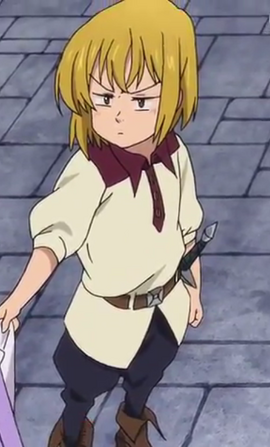 Pelliot「ペリオ Perio」 is a young boy who, like his group of friends, love to roleplay the Seven Deadly Sins and order the villagers around.

Pelliot was shown to have a short temper and take playing Seven Deadly Sins very seriously. Pelliot tends to be bossy around his friends, even Armando but shows he has a kind heart as he saved Armando when he was injured and took him in. When Armando revealed his true identity, Pelliot was upset and wanted Gowther to stay despite him being a criminal but broke down in tears when he refused and was upset that his personality was false.

Many years ago, when Pelliot was a little kid, Pelliot found a badly injured Armando who collapsed outside of the village. Despite being young, Pelliot carried Armando back to the village and looked after him until he was healed. Afterwards, Armando was hired by Pelliot father to look after Pelliot to this day.

Pelliot and the Fake Seven Deadly Sins were playing around in the village and ordering people around, unaware they were merely playing along. Pelliot and the rest headed to the forest where their found the Boar Hat which surprised them since they weren't any bar there. Pelliot and got excited and went there, to order the owner to pay them for standing in his land. The real Seven Deadly Sins came out, and realize that the kids were playing them and King information on the next Sins is false. Meliodas told Pelliot that they were about to leave, Diane then appear, thinking the rest has come back which shock the Fake Deadly Sins due to her size and thinking she was about to eat them, but got angry at them. Later the Fake Deadly Sins got along with the Real Deadly Sins. Pelliot then told the Sins about the Mountain God that live in Ordan mountain. The kids were later informant from a villager that a group of Holy Knights Dawn Roar and the kids headed to the forest to find them. As the Fake Deadly Sins were traveling in the forest, Armando try to convinced Pelliot to turn back since it is dangerous, Pelliot got upset at Armando and told him he shouldn't have saved him in the past and continued to walk. Pelliot and the kids then found the Holy Knights who they were facing against the Armor Giant. The kids were scared, but Pelliot ran there to see them up close, and saw the Armor Giant to which he thought he was the criminal and start attacking him to which the Armor Giant was about to smash him, but Armando ran to his side and push him away, which end up him getting smash instead.

Pelliot pass out during the battle, where the real Gowther, Armando took Pelliot out of the battlefield to not be harm. When Pelliot woke up, Gowther told him to leave the area since it is too dangerous for Pelliot and went back to the Deadly Sins to fight with all his power. After the Deadly Sins defeat the Armor Giant, Pelliot went to Gowther and wanting to speak with him in private which Meliodas allow it. Pelliot hugged Gowther when their were alone and ask him to stay which Gowther could not since he have to be there for his teammate which Pelliot thinking that Gowther is using it as a way to leave him. Gowther then shape back to Armando to explain to Pelliot that Armando personality does not exist and that he base his personalty on a traveling entertainer since Pelliot enjoy him and the hair style belong to Pelliot's dead mother.

Pelliot grew upset at Gowther for revealing such information and decided since if he cannot stay, Pelliot will become a Holy Knight to capture him and would not forgive him even if he apologize to him, but Gowther turn around and told them that they will meet again which made Pelliot break down crying.

Pelliot's debut and circumstances of how he met Gowther in the anime are different to the manga's. In the anime Pelliot arrives with his father to Briannia coincidentally as Meliodas and Gowther are following Gilthunder by Merlin's petition. Due to Gowther's likeness to his deceased mother he forces him to play with him to a role play as fake seven deadly sins. Pelliot wants to play as Meliodas and he reluctantly allows Gowther to play as Goat of Lust as he ironically doesn't believe he is the real Gowther.

As Gowther helps Pelliot catching a fat cat as part of their fake mission, he refuses to let him go as he can't tell why he needs him. Gowther uses his searching ability learning of his likeness to his mother, he ask him what his mother used to called him as he take off his glasses and changes the lengh and tone of his hair. Gowther calls him with his mother voice only to be hugged by a tearfully pelliot.

Pelliot's father suddenly appear angrily asking why he ran away, Pelliot try to explain him but as he turn around he finds Gowther nowhere to be seen. His father takes him away to his kid's cofussion as Gowher watch him from above from a roof curious about his reaction to his triggered memories.

Pelliot is briefly seen when the demons are stealing two Holy Knight's souls. He and his friends appear to be very angry.

On the journey to Corand, Gowther stops by Ordan to see Pelliot and helps the village stand up to the demons that Pelliot was trying to fight all by himself. The group of friends were all pleased to see "Armando" when Pelliot realizes that Gowther was really one of the Seven Deadly Sins and wasn't lying. He tells Gowther that he still wants to be a Holy Knight, but not to capture the sins, only so that he could be more like Gowther.

Pelliot is an ordinary child with no super-human abilities who carries around a small sword.

Retrieved from "https://nanatsu-no-taizai.fandom.com/wiki/Pelliot?oldid=150349"
Community content is available under CC-BY-SA unless otherwise noted.