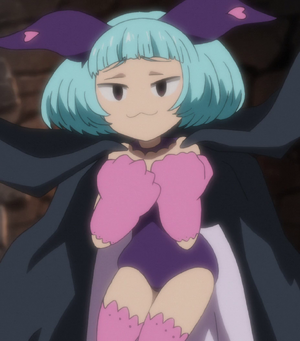 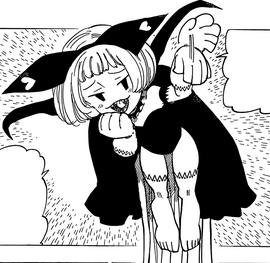 Peronia「ペロニア Peronia」 is a little demon of the Demon Clan.

Peronia is a small woman with blue hair and a small mouth with fangs. She wears a dark blue leotard, a black cape, a black choker, long pink gloves and leggings.

Along with the rest of the Demon Clan, Peronia was sealed away by the Goddess Clan after losing the Ancient War against the other four races (humans, fairies, giants, and goddesses).

Peronia was released from the seal along with many other demons thanks to the sacrifices of Zeldris. After being freed, Peronia remained in Camelot taking care of an unconscious Estarossa. When Estarossa manages to recover, Peronia receives him saying that she took care of him the four days he was in a coma, although Estarossa is uncomfortable before her presence. Peronia then accompanies Estarossa to meet Zeldris and Meliodas. When Estarossa says that he will not fight for the throne of the Demon King if Meliodas gives Elizabeth to him, Peronia is surprised. When Cusack is impaled by Meliodas when he tries to intervene in his confrontation with his brothers, Peronia understands that she can not interfere without being killed.

Peronia says something to Cusack when he wondered why Zeldris was willing to help Meliodas, causing Cusack to leave the castle.

After leaving in search of the Commandments, Zeldris orders Peronia to make sure that no one approaches the castle. When Arthur embarks to retrieve Excalibur, Peronia catches him inside her Märchen Maze, preventing him from approaching the castle. However, Peronia is surprised by Cath, who claims to be hungry. Cath apparently devours Peronia, allowing Arthur to escape from her magic.

Retrieved from "https://nanatsu-no-taizai.fandom.com/wiki/Peronia?oldid=144439"
Community content is available under CC-BY-SA unless otherwise noted.