Nanatsu no Taizai Wiki
Register
Don't have an account?
Sign In
Advertisement
in: Groups, Characters, Pleiades of the Azure Sky,
and 2 more
English

Pleiades of the Azure Sky

The Pleiades of the Azure Sky「蒼天の六連星, Sōten no Rokurensei」 are a group of Holy Knights of the Kingdom of Liones led by Denzel Liones, the Assistant Great Holy Knight. They were assigned to guard the borders of the kingdom by the two Great Holy Knights, Dreyfus and Hendrickson.

During the award ceremony held in honor of the Seven Deadly Sins' liberation of the kingdom, three of the Pleiades of the Azure Sky, Deathpierce, Dogedo and Waillo, stepped forward in objection. Having been assigned to the borders of the kingdom, they wished to witness the strength of those who saved the kingdom firsthand. Bartra reluctantly agrees to a friendly match between Meliodas and Dogedo.

Meliodas easily dodges Dogedo's attacks and retaliates with his own. Death Pierce concludes that they've seen enough and leaves, revealing that Dogedo's close friend had lost his life during the battle with Hendrickson.

When Fraudrin of the Ten Commandments arrives at a town near the borders of the Kingdom of Liones, two members of the Pleiades of the Azure Sky, Arden and Deldry, ambush him using their Powers, Vain and Love Drive, to weaken him. Waillo then knocks out the weakened Fraudrin, and the three drag him away while Grayroad watches them unknowingly.

After Dogedo manages to prevent their deaths, the Pleiades reunites with some Holy Knights from Liones to talk about the situation of the Ten Commandments.

During the invasion of the Ten Commandments in Liones, the Pleiades helps to protect the royal family. During the subsequent battle, two members, Denzel and Dogedo lost their lives. Denzel is killed by Derieri after being possessed by the goddess Nerobasta and Dogedo falls victim of Grayroad's Pacifism commandment.

When the Four Archangels form an alliance with Liones to face the Demon Clan, the Pleiades shows their discomfort because of the death of their leader at a goddess's fault. In order to get their loyalty, Ludociel uses Breath of Bless on them, giving them a power boost but, at same time, brainwash them to turn them into his pawns.

As the new Holy War begins, the Pleiades form part of the Search-and-Destroy Force that will directly face the Demon Clan army and clear the way to Camelot. 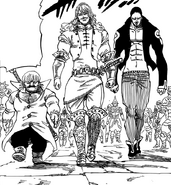 Current members of the Pleiades of the Azure Sky