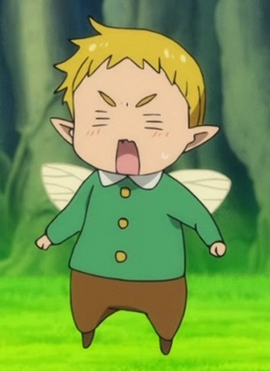 Puora「プオーラ Puōra」 is a fairy who lives in the Fairy King's Forest.

Puora looks like a little boy with blond hair and small insect wings. His eyes looks like three lines. He wears a green suit with yellow buttons and brown pants.

When Ban, Jericho and King arrive at the Fairy King's Forest, Puroa, along with the other fairies, receives Ban as their king. He then looks mocking Jericho for being human, saying she shouldn't be in the forest.

When an Albion appears destroying the forest, Puora goes along with Jericho to look for Ban, finding the entrance to the Sacred Tree blocked by roots controlled by Gerheade. When Jericho cuts them, the two find Ban incapacitated by Gerheade.

During the Holy War against the Demon Clan, Puora goes along with the other fairies and giants to meet with the Search-and-Destroy Force and join on their way to Camelot. On the way, the group is ambushed by a new ordeal of Demons. During the fight, Puora hits a Gray Demon with his golf club just to be attacked by it, but then is saved by Elaine. Puora is saddened by the rest when Elaine dies in Ban's arms, surprising himself when Ban sacrifices his immortality to resuscitate her.

When the Demon Army retreats from Britannia after the defeat of the Demon King, Puora and the other survivors see themselves in front of the end of the Holy War.

That night, Matrona along Gerheade and Puora comes to Liones after being invited to the celebration. In the streets, the three meet with Jericho and Guila.

Retrieved from "https://nanatsu-no-taizai.fandom.com/wiki/Puora?oldid=145833"
Community content is available under CC-BY-SA unless otherwise noted.