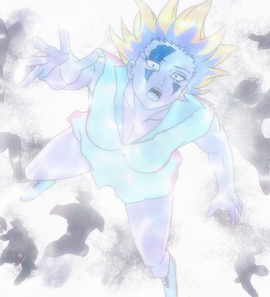 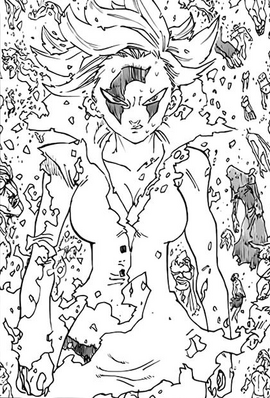 Rajine has short and messy hair. Her demon mark is shaped like a crescent on her right eye and a small mark under her left eye. Unlike Derieri, she wore clothes, such as a light colored dress. It is seen that she uses her darkness to cover her crotch. She's somewhat muscular and has a good figure.These physical characteristics makes her very similar to her younger sister, Derieri.

Little is known about her personality, but according to Derieri, she had feelings for Monspeet.

During the Holy War, she was one of the many demons that Ludociel kidnapped and locked inside his giant Ark to lure the Ten Commandments to the Fairy King's Forest and eliminate them. When the Commandments and an army of Demons fall into the trap, the hostages are killed in front of their people. Before dying, she called out for her sister and attempted to reach out her hand for her, leaving Derieri in shock to see her die.

It is not clear what kind of relationship she had with her younger sister, but it seems that they cared a lot about each other. Her death provoked in Derieri a hatred for the Goddess Clan that remains to this day. She also did not reveal her feelings for Monspeet apparently out of respect towards Rajine's feelings and later said that she talked to Monspeet a lot as she believed her sister would appreciate it.

According to Derieri, she always was in love with Monspeet.

Retrieved from "https://nanatsu-no-taizai.fandom.com/wiki/Rajine?oldid=147638"
Community content is available under CC-BY-SA unless otherwise noted.