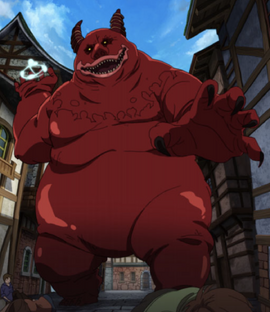 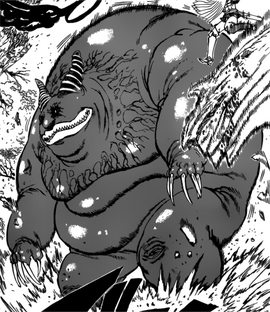 The Red Demons appear as large, obese creatures with clown-like faces. They possess sharp claws and teeth that grow in rows, along with two ridged horns protruding from their heads. The veins on their necks are prominent and can be easily seen. They have sagging skin and do not possess a tongue. However, official art from the anime depict it with a tongue (which could be due to it not having been revealed back then not to have a tongue). They are 800cm (26'3") tall.

A spotted light-colored variant of the Red Demon with a single horn appeared on one occasion.[2]

The Red Demons are savage monsters. Though they possess a certain level of intelligence, they are shown to be destructive and impossible to reason with.

The Red Demons were sealed along with the rest of the Demon Clan after losing to the Goddess allied clans in an ancient war. However, a number of individuals somehow managed to escape the seal.[3]

Just as Ban offered to find Elaine's brother, the Red Demon suddenly appeared, probably to steal the Fountain of Youth, and started burning the Fairy King's Forest with its purgatory fire. Ban, immediately instructing Elaine to take the cup of the fountain and escape, began attacking it and successfully removed its heart. However, it did not die, since demons possess more than one heart, and then fatally wounded both Elaine and Ban with its claws. After Elaine made Ban drink the Fountain of Youth, he becoming immortal, quickly and angrily killed the demon.[4]

Sometime after it was killed by Ban, its corpse was found by some knights who were sent to investigate the Fairy King's Forest's destruction, including Hendrickson, who also discovered a power enhancing quality of the demon's blood, and that its blood could transform compatible living beings and draw out immense power after witnessing crows mutated after they ate its flesh.[5] This quality of its blood has been used by Hendrickson to secretly increase the abilities of many ordinary Holy Knight apprentices, many of whom were considered as failures. The apprentices were called the "New Generation" with the kingdom unaware of their new abilities' origin.[6] Hendrickson also experimented on himself as well, resulting the obtaining of Demon powers and Hellblaze.

The Red Demons are shown to be powerful beings, capable of mass death and destruction. Despite being low-ranked among the demons, their strength surpasses that of a standard Holy Knight. In its battle against the immortal Ban, it demonstrated great strength to withstand and persevere through a barrage of lethal strikes, leading to a battle of endurance between the two. Its claws were strong enough to greatly wound Ban, who only survived the onslaught due to the immortal regenerative powers gifted to him by the Fountain of Youth.[7]

As members of the Demon Clan, they retain the characteristic biological features of their species, including possessing multiple hearts and the ability to create unnatural black wings that they can use to fly.[7] Their most catastrophic power was the ability to breathe Purgatory Fire「煉獄の炎 Rengoku no Honō」 from their mouths. This unholy, black flame was so destructive it could even burn the Fairy King's Forest to the ground; a particular forest that could not be burnt by natural fire. They are also capable of firing destructive beams from their eyes, which one used to fatally wound both Ban and Elaine before they had time to react.[7]

Their blood possessed the unusual trait of unlocking great power within certain individuals. Those compatible to the blood receive unnatural power upon consumption, shown by their eyes changing color to an eerie black. Incompatibility to the blood leads to rapid swelling of the body, ultimately causing the individual to explode and die.[8]

Retrieved from "https://nanatsu-no-taizai.fandom.com/wiki/Red_Demons?oldid=133773"
Community content is available under CC-BY-SA unless otherwise noted.