Revival of the Demon Clan 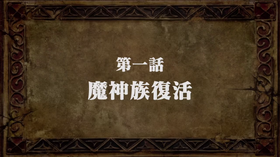 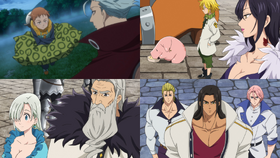 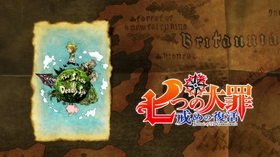 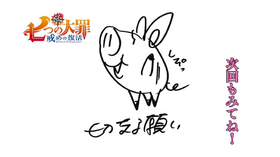 Revival of the Demon Clan「魔神族復活 Majin-zoku Fukkatsu」 is the first episode of Season 2 of the The Seven Deadly Sins anime.

As the kingdom begins to rebuild after the coup attempt, the king honors the Seven Deadly Sins for their bravery with a medal ceremony.

Elizabeth wakes up from a bad dream. She dreamt that she was on a journey with Meliodas and the others. Elizabeth goes and greets her father, Bartra Liones. He makes a comment about her complexion and she tells him about her bad dream. He tells her about how he plans on giving the Seven Deadly Sins medals since they helped the kingdom achieve this new found peace. Elizabeth goes and tells Hawk. Meliodas appears and shows the two of them his new clothing courtesy of Elizabeth. Gowther arrives and displays his new outfit as well. King comes to see what all the fuss is about and Hawk notices that he has a new helmet. Diane tells them to come outside and shows off her new outfit, courtesy of Merlin.

Ban walks outside and Diane quickly notices that he isn't wearing the outfit she and King picked out for him. Ban says he'll put it on later if it's cool. Meliodas tells everyone that they should celebrate since the ceremony is tomorrow. During the celebration, Ban asks Meliodas to come with him outside. Ban announces that he's quitting and that today is his last day in the Seven Deadly Sins. The next morning, Ban leaves without saying goodbye. King does manage to see him before he leaves and asks where he's going. He tells King that he's going to the Fairy King's Forest. Later, the Seven Deadly Sins, minus King and Ban, attend the ceremony. Also attending are Griamore, Gilthunder, and Howzer. The crowd wonders what they're doing here.

Before King Bartra can hand out the medals, Meliodas objects. He tells the crowd that if they have something to say to him then to say it to his face. Then, an order of Holy Knights, the Pleiades of the Azure Sky, step forward and approach Meliodas. The three present are Deathpierce, Waillo, and Dogedo. The Pleiades asks that Meliodas and the Seven Deadly Sins display their power for them or else they can't accept that they deserve the medals. The King gives them his permission. Dogedo goes first and Hawk tells Meliodas his stats. Gowther notices that Hawk is wearing a new earring. Merlin tells him that it was a gift from her and that it allows Hawk to see other peoples power levels.

Dogedo starts throwing punches but Meliodas avoids them all. Dogedo tries to goad him on by mentioning Hendrickson and Dreyfus but Meliodas still manages to break all of Dogedo's fingers, before defeating him with ease. Meliodas asks who's next but Deathpierce tells him that that demonstration was all it took to change their minds. They take their leave and Hawk assumes it's because Meliodas power level outmatches theirs. The Seven Deadly Sins get their medals. Elizabeth asks what they do with King's and Ban's medals. Meliodas tells her to hold on to them, that they've left. Elizabeth realizes that it's just like in her dream but believes that she's over thinking everything. Diane asks what's wrong and Elizabeth asks her if she knows why Ban and King left. Diane says that she doesn't know and that Meliodas won't say anything.

King asks Ban why he'd go to the Fairy King's Forest now. Ban says it's none of his business and to go bother someone else. King says he isn't leaving until Ban tells him the truth. The Seven Deadly Sins run into Griamore, Gilthunder and Howzer. Griamore still can't believe that Dreyfus killed members of the Dawn Roar. He believes that it's a mistake and that he was murdered. Howzer wants to believe that but that's the facts. Merlin tells them to figure it out for themselves. After they've gone, Howzer agrees that they should trie and search for the truth. Gilthunder says they can begin by looking in Dreyfus's room.

Retrieved from "https://nanatsu-no-taizai.fandom.com/wiki/Revival_of_The_Commandments_Episode_1?oldid=149057"
Community content is available under CC-BY-SA unless otherwise noted.