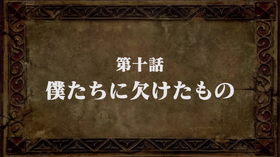 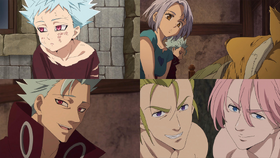 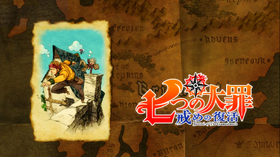 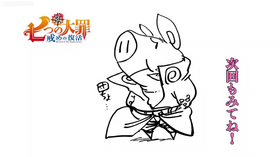 What We Lacked「僕たちに欠けたもの Boku-tachi ni Kaketa Mono」 is the tenth episode of Season 2 of the The Seven Deadly Sins anime.

Ban reflects on his past after returning to his childhood home in Ravens. Meliodas's allies train for their inevitable war with the Ten Commandments.

Jenna revives Gilthunder, Howzer, and Griamore. King tells Hendrickson that he'll never forgive him for what he did to Helbram. Hendrickson says that he'll accept that but first he needs to protect Kingdom of Liones and save Dreyfus from the Ten Commandments. Jenna claps her hands and tells them it's time to train. Ban remembers hiding out with Zhivago. Zhivago asks about his parents. Ban remembers how they beat him up and tossed him out into the cold. Ban gets tricked by two people to get into a barrel for a gold coin. He realizes too late that the coin is fake before they close the lid on the barrel. The kidnappers intend to sell Ban to a noblewoman who will play with him and then kill him when she's done. Along the way, the kidnappers get accosted by Zhivago and Ban escapes. Zhivago and Ban share another meal where Ban thanks Zhivago for the help. Ban asks Zhivago to teach him how to steal. He falls asleep midsentence and Zhivago guards him. The next couple of days Zhivago teaches Ban how to steal and helps Ban escape when he gets caught.

Ban asks Zhivago about his son. Zhivago tells him his name is Selion. Zhivago says that he has another son and describes Ban. Ban asks why he only goes to see Selion after sundown. Zhivago says because that way the Holy Knights won't be able to find him. Ban asks if Selion knows he's a thief and Zhivago says yes. Zhivago tells Ban to never trust humans. Ban says that he only trusts Zhivago. Zhivago hugs him and then tells him to go to bed because they have to be ready for tomorrow's job. The next morning, Ban decides to do the job himself to surprise Zhivago. It goes wrong and he ends up getting beat up. The beast man tells older Ban that he looks like his son. Jericho asks how this is possible. The beast man tells Jericho about how he hasn't seen him for thirty years and that he probably hates him. Zhivago remembers how he woke up late on the day of the job. When he arrived he found Ban getting beat up but also overheard that the Holy Knights had seen a werefox in the mountains. Zhivago had to choose between Selion and Ban. He chose Selion and rushed to his aide. He didn't make it in time and Selion died in his arms.

Zhivago wonders if he made a better decision then maybe he wouldn't have lost everything. Ban tells him that he didn't make the wrong decision. He says that even if Zhivago had saved him he'd never have forgiven him for abandoning his own flesh and blood. Ban tells him that he never hated Zhivago and that he was the ideal father. They embrace. Jenna tells the group that to train they must leave all their special weapons and be bare when entering the cave. Gowther takes this literally and disposes of all his clothing. She gives them ash staffs to practice with and invites them all to step inside and begin. Hawk leads them inside but gets separated from the group. She runs towards the light. Gilthunder and Howzer face off against a monster. Their normal way of fighting isn't working so they improvise. They wake up outside of the cave. Jenna tells them that they let up at the end but that the tactics they used along the way were brilliant. That they have taken the next step in developing their skills. Hendrickson watches from afar. He's so grateful that he didn't kill them. Meliodas comes up to him and thanks him for saving Griamore, Gilthunder, and Howzer. Meanwhile, Gowther and Arthur fight a suit of armor. Gowther tries to take control of it and ends up getting his head cut off. Gowther hypothesizes that the suit must be controlled by someone else. Arthur looks around and tries to find who is controlling it.

King asks Jenna if he can go into the Cave of Training now. Jenna asks why he had a change of heart. King says that he wants to do all he can to save Diane. Jenna suggests he go in with Hendrickson but Meliodas volunteers to go in with him instead. While inside, Meliodas asks King to be a little open-minded when it comes to Hendrickson. He explains that Hendrickson was being controlled by Fraudrin when he did all those evil things. King asks who Fraudrin is and Meliodas tells him that he's part of the Ten Commandments. King asks Meliodas how he knows so much about the Ten Commandments. King assumes that this is because Meliodas is part of the demon race too. He asks if Meliodas really is their ally as he attacks Meliodas with his ash staff.

Retrieved from "https://nanatsu-no-taizai.fandom.com/wiki/Revival_of_The_Commandments_Episode_10?oldid=115518"
Community content is available under CC-BY-SA unless otherwise noted.